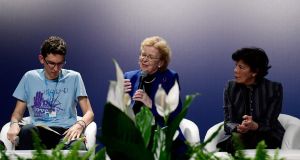 An international declaration which, if adopted, would legally recognise the right of children to a healthy environment has been unveiled at the COP25 climate change gathering in Madrid.

The Intergovernmental Declaration on Children, Youth and Climate Change is “a historic step towards accelerating inclusive, child-responsive climate policies”, according to Unicef, its main proposer.

The declaration will require climate policies that “protect, respect and fulfil the rights of society’s most vulnerable, and enhance the participation of young people in decisions that affect them”, said Paloma Escudero, Unicef global director of communication.

Nine countries have signed the declaration, with many more expected to do so by the conclusion of COP25 at the end of this week.

The declaration received an endorsement from Mary Robinson, former Irish president and UN commissioner for human rights, and the State is understood to be considering whether to endorse it.

Mrs Robinson said the the climate crisis was a children’s rights issue yet the majority of commitments to address global warming set out by member states “do not mention children or young people”.

She told an event highlighting young people’s role in responding to the impact of climate change that when she was growing up she did not have the shadow of an uncertain future that is over children today.

Mrs Robinson hosted an intergenerational dialogue between five young climate activists and five ministers from Chile, Costa Rica, Fiji, Spain and Nigeria. She said such conversations needed to happen in every country as the world moved away from fossil fuels and became a safer, healthier place to live.

At the launch of the declaration, member states were urged to include measures to enhance youth participation in decision-making in their national climate plans.

The case for the declaration on behalf of young people was made by 17-year-old climate activist Theo Cullen-Mouze from Clare Island in Co Mayo, who said he was already experiencing climate shocks in the form of wilder winter storms and longer summer droughts.

He outlined how he became a climate striker due to profound concern about the threat to the planet, and he protests outside local authority offices most Friday’s with his sister Maude (13). She was on her own last Friday as he was travelling by sea to COP25, he added, but the reality was 500,000 marched through Madrid demanding climate action in solidarity with her.

He expressed “enormous gratitude for being allowed to be here”, but added that he was saddened by the “glaring emissions gap” in responding to climate disruption. Indigenous people were fighting far longer than he has been on climate change “yet we cannot hear them”.

“Politicians have promised much but delivered very little. Children are dying. That sums up the climate crisis. Please listen to the science. And sign the declaration. The politics of the past won’t get us out of this,” he said.

Mrs Robinson said the discussion reaffirmed her view that young people were ahead of the rest of the world in how to address the climate issue, notably in their solidarity and wish to leave nobody behind. However there was a need for spaces where they are listened to, and for their proposals to be acted upon.