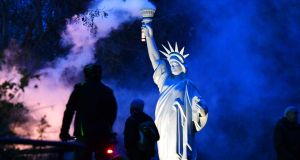 A replica of the Statue of Liberty emitting smoke from the torch created by Danish artist Jens Galschiot at the Rheinaue park during the COP23 UN Climate Change Conference in Bonn, Germany. Photograph: Patrik Stollarz/AFP/Getty Images

Ireland’s record in addressing climate change and its commitment to the historic Paris agreement on tackling global emissions was defended by the Minister for Climate Action and Environment Denis Naughten at the UN climate talks.

In an address to the plenary gathering of representatives of close to 200 countries who have signed up to the Paris accord, Mr Naughten also insisted Ireland was tackling the high levels of emissions arising from agriculture.

“While Ireland is a global leader when it comes to emissions [producing the lowest level] per litre of milk produced , we can and will do better,” he added

Agriculture accounts for a third of Irish greenhouse gas emissions, and Ireland is likely to miss its Paris targets for overall emission reductions by 2020 – one of fewer than four member states likely to miss legally-binding commitments.

Mr Naughten said Ireland was “now working to catch up on the beef production emissions”, through an innovative programme of genotyping – analysing the genetic make-up of one million beef-producing animals. “On this scale, this is a global first and we want to share our knowledge with the global community, so that we can all benefit.”

In tandem with food production, food waste was being addressed, “right from the farm” to the retailer, and the provision of food waste bins was being extended to every home in Ireland.

Ireland is a global leader when it comes to management of volatile wind-generated electricity on a small isolated grid, he said. “Building on this knowledge we have developed world-class research and test facilities for the exploitation of ocean energy. This year we tested 22 different ocean energy prototypes, some with very promising results.”

Mr Naughten said the task of political leadership by was “to bridge the gulf between the global challenge and national responsibility, between each countries’ obligation and the responsibility of every citizen, young and old, alike”.

Ireland’s first statutory National Mitigation Plan had put the country on a pathway to achieve “our own long-term decarbonisation targets”. A national Dialogue on Climate Action would ensure an inclusive process of engagement and consensus to support our transition to a low carbon and climate resilient future, while the National Adaptation Framework to Government would “reduce our vulnerability to the negative effects of climate change”.

Through participating in the global NDC Partnership, Ireland would offer its expertise and insights from its existing work with developing countries. “This will focus on adaptation support for our developing country partners and on sharing our experiences with the world.”

“Listening to him speak about Irish agriculture had the Alice in Wonderland feel of Soviet-era grain harvest reports. The sad truth is Ireland plans to ramp up climate pollution from agriculture and is lobbying feverishly in Brussels for loopholes to avoid any consequences for that recklessness,” he added.