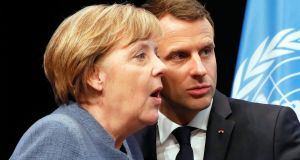 Germany chancellor Angela Merkel and French president Emmanuel Macron at the UN Climate Change Conference COP23 in Bonn, Germany, which is under the presidency of Fiji. Photograph: Ronald Wittek/EPA

Not enough progress has been made at the current climate talks on securing the scale of funding necessary to help vulnerable developing countries, according to climate justice campaigner Mary Robinson.

The former Irish president cited the case of small island states which risked literally going under because of rising sea levels and countries threatened with mass migration caused by the impact of climate changes.

While wealthier countries had committed to $100 billion annually to support poorer countries’ efforts, there were some indications of an awareness that “it’s not just $100 billion, it’s trillions that have to move, and primarily to developing countries to build up their infrastructure”.

Not enough progress had been made on the issue, but there was another round to go in December with a summit in France, she said.

The intervention of French president Emmanuel Macron had been “very strong”, similarly that of the German chancellor Angela Merkel, she said. Both had underlined they were not put out by the absence of the US. “They both mentioned Trump [and] ‘it’s not going to disturb us’. That was good to hear,” she added.

While Fiji’s presidency of the COP23 talks had facilitated meaningful engagement, the high level negotiations had not gone as well, she said.

There had been a very big Chinese influence, which had slowed decisions. That may have been to do with the absence of the US, and a view that decisions would be pushed on to next year, she suggested. Mr Macron and Dr Merkel, however, showed leadership on the need for sharper declines of carbon emissions, which may be an attempt to seize that ground, she said.

“Ireland, within the European countries, is not doing very well and that is not good,” Mrs Robinson added.

“We still have not got the right mindset – all of us – to say anything we can do now, we must do it, because we have the time – just about – to do it. If we don’t, that time is gone and nature will begin to have these bad impacts,” she said.

Local and indigenous women’s voices especially were absent from decision- making on climate change, she said. They needed to be heard and allowed to participate in the collective global response. As a consequence she was “very pleased” by the adoption of the gender action plan to address this inequality and adoption of the UN Local and Indigenous People’s Platform. This was an extraordinary achievement given the level of opposition up to now, she believed.

While hosting the event in Bonn, the Fijian presidency of the talks had emphasised with their inclusive talanoa approach, the need to learn from the experiences of those who understand the day-to-day reality of climate disruption “and incorporate their traditional and indigenous knowledge into the global response on climate change”.

Practically, this meant transforming institutions of governance “to enable all people to participate in the decisions that impact upon their lives”.