Mobile app developed to fight back against invasive plant species 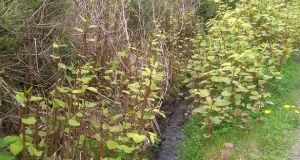 Japanese knotweed in the River Feale catchment, from a report received via the new app

A new mobile phone app has been developed to help tackle the scourge of invasive plant species on riverbanks and roadsides.

Limerick City and County Council has launched the app Report Invasive Plants, which will link to a national database, providing information on the prevalence and locations of plants.

Anne Goggin, senior executive engineer with the council, said the app had its beginnings in a project set up to examine the river Loobagh in Limerick in 2015. Farmers, community groups, local development companies, the State forestry company Coillte, fisheries experts and council staff worked together on the project.

“We were interested to see what was happening elsewhere so we went to Northern Ireland, to the Ballinderry Rivers Trust, to look at the model of a rivers trust and see if it would be applicable down here,” Ms Goggin said.

“One of the things the group really liked about the model was the way they were dealing with invasive species, in particular giant hogweed, which is a huge problem in the Loobagh and Maigue catchments.”

A pilot project was put in train to control giant hogweed on a 12km stretch of river.

“But what we realised was you really need to know where the problem is and the extent of the problem before you can deal with it,” Ms Goggin said.

The harm that might be caused by such plants includes damage to infrastructure, including houses and tarmac surfaces.

Japanese knotweed was introduced as an ornamental plant in the 19th century and has spread across Ireland, particularly along watercourses, transport routes and waste grounds. It can threaten native plants and animals by forming dense thickets and releasing a chemical substance to inhibit their growth.

“There were a number of invasive species apps available, including a very good one from the National Biodiversity Data Centre, but I felt that one in particular, while it was really good, required a degree of specialist knowledge,” said Ms Goggin.

She liked an app called See It? Say It, which was developed by the Environmental Protection Agency for reporting waste and other environmental issues, and she wanted one modelled on it. The council put the app development out to tender and it cost about €10,000.

It allows users to take a photograph or upload one from their library and will embed GPS (location) co-ordinates if the function is enabled on the phone.

The council will verify that the invasive plant is what the person believes it is and it will appear on the app’s mapping function.

A second phase of the project will involve the development of a website that will allow users to download the data.

Ms Goggin said the data will link directly with the National Biodiversity Data Centre, which is critical. “There should only be one primary repository of all this data, but ours is just an easy way for tidy-towns groups, anglers, anybody who has an interest in capturing the data,” she said.