Dublin's new urban quarter to have population of 8,000 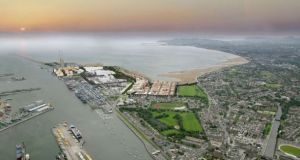 Homes for 1,000 more people than previously planned are to be added to the redevelopment scheme for the Irish Glass Bottle site and the Poolbeg Peninsula in Dublin.

Up to 3,500 homes, all of which will be apartments, are expected to be sanctioned for construction over the coming years in the new urban quarter at the city’s east end, taking the projected future population from 7,000 to 8,000.

The increase in homes in the new Poolbeg Strategic Development Zone, which is due to be approved by Dublin City Councillors next month, will require taller apartment blocks, and a reduction in the amount of office and retail space that had been planned for the area.

Once the plan has been approved the council will have the power to grant development permission that cannot be appealed to An Bord Pleanála.

In his report to councillors, council chief executive Owen Keegan said “considerable height is needed” to achieve the required numbers of apartments and make best use of available lands.

His report follows a submission from the Department of Housing asking the council to increase the number of homes from a maximum of 3,000 to 3,500.

The department said it would support the development of apartments raging from four to 16 storeys, “as a means of creating a new skyline, countering urban sprawl and enabling residents to live close to work and facilities”.

In its draft plan the council had planned to allow apartment blocks up to 16 storeys or 50m, but the majority of schemes would be in the four- the seven-storey range. To accommodate more homes, the council plans to reduce the number of low rise blocks, those in the four- to five-storey range and increase the numbers in the eight to nine and 10 to 12-storey range, while keeping the number of very tall blocks, those up to 16 storeys, at a minimum.

The council also proposes to increase the amount of land set aside for housing from 80 to 85 per cent, cutting the amount of commercial space – office and retail down to 15 per cent.

A large number of councillors wanted to increase the amount social housing up to 30 per cent, from the 10 per cent proposed. The plan does not propose increasing the amount of social housing, but does propose that another 10 per cent of housing would be “accessible to households on an average industrial wage”.

A large number of submissions were made in support of a film studio on the peninsula. Mr Keegan said it would not be appropriate to specify the use of the commercial area, and that housing and the development of Dublin Port were the priorities. Although a studio “not a priority” it was “permissible”, he said.

James Morris, who wants to develop an €80 million Hollywood-style studio in the zone, said he was encouraged by the support for the development. “We will continue to make the case for Dublin Bay Studios. It would be an engine for employment and a driver for creative industries in the city.”