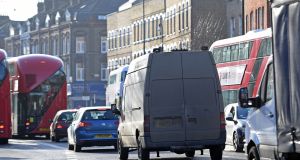 Pollution from traffic fumes can be as bad for people’s happiness as bereavement or divorce, according to a study. File photograph: Victoria Jones/PA Wire

Pollution from traffic fumes can be as bad for people’s happiness as bereavement or divorce, according to a study.

Academics at the University of York have said the effect of nitrogen dioxide (NO2) on life satisfaction is comparable to that of significant events in people’s lives.

In a new paper, Sarah J Knight and Peter Howley write that “the welfare gains to society from reductions in exposure to NO2 can be substantive.

“Our results suggest a significant and negative association between mean annual ambient NO2 and life satisfaction, and moreover that these effects are substantive and comparable to that of many ‘big-hitting’ life events.”

The paper says: “We find that NO2 is significantly related with subjective wellbeing, albeit much smaller in magnitude than previous estimates after controlling for a variety of important spatial controls.

“That being said, the effect size is substantive and comparable to that of many other widely-studied determinants of subjective wellbeing.

“For example, our standardised coefficients suggest that the effect of NO2 on life satisfaction is equivalent to approximately half that of unemployment, and equivalent to that of marital separation and widowhood, factors commonly associated with some of the largest wellbeing reductions in the literature to date.

“Given that the effect of NO2 is, to some extent, experienced by everyone (ie not everyone is unemployed but everyone is subject to a certain level of NO2 exposure), this suggests that the welfare gains to society from reductions in exposure to NO2 can be substantive.”