Without collections ‘Catholic life, as we have it, would disappear’ - Fr Brendan Hoban 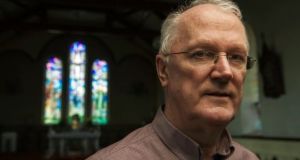 Church collections were ‘the main-stay of parish life’ and restrictions imposed due to the pandemic were having a drastic effect on these, he said. File photograph: Keith Heneghan/Phocus

The Catholic Church in Ireland is facing huge financial uncertainty due to the ongoing Covid-19 pandemic and this was now becoming a threat to its very existence on the island, the co-founder of the Association of Catholic Priests has said.

Killala priest Fr Brendan Hoban said church income was “in free-fall, and will be (it appears) for some time” .

Church collections were “the main-stay of parish life” and restrictions imposed due to the pandemic were having a drastic effect on these, he said.

In Dublin’s Catholic Archdiocese income from collections fell by around 80 per cent when Churches closed last March, a spokeswoman said. Since the reopening of Churches last June “anecdotally there is a modest improvement in collections, but obviously with reduced numbers permitted at Mass - it is still a very significant challenge”, she said.

Two donation streams – the “common fund” collection for priests and the “support for share” fund – dropped by 70 and 80 per cent respectively in Dublin between March and June compared with the same period last year .

Fr Hoban said that since the early 19th century Catholic priests in Ireland were “directly dependent on the people for their income” as has “the provision of a parish infrastructure” such as chapels and priests’ houses.

“It’s why collections are a main-stay of parish life, the life-blood of local parishes. Without them Catholic life, as we have it, would disappear,” he said.

There was “ a strange belief hanging around for years that the Catholic Church has plenty of money”.

“This is a persistent fallacy, beloved of critics of the Church, even though it’s glaringly obvious that without church collections there’s no other form of income available. The Catholic Church is as rich as its adherents are generous – no more and no less,” he said.

“At present, because gatherings of people are strictly regulated by Government edict, only a tiny percentage of Catholics can attend weekly Mass, the location for most collections. An even lesser percentage actually attend as fear of contracting the virus has dissuaded many of those who usually attended­ – and contributed. The result is that the income of the Catholic Church is now in free-fall, and will be (it appears) for some time,” he said.

The fear now was that “while religious practice had declined significantly over recent years (for a variety of reasons), the pandemic may well be what sends that decline spiralling out of control” and “the public profile of the Church may diminish to the point of virtual invisibility”, he said in his current Western People column.

In Dublin’s Catholic Archdiocese priests’ incomes were reduced by 25 per cent at early stages in the pandemic and as churches were closed.

A voluntary redundancy scheme was introduced for all 82 staff members in the diocesan support services and parish pastoral workers during the summer with hopes that a third of staff might partake. It was oversubscribed.

The spokeswoman said the archdiocese had “exceeded the number of people it had anticipated to take the voluntary redundancy scheme - those staff leaving will do so on phased basis between now and the end of December - a definitive figure will not be clear until then.”

Meanwhile Crosscare, the archdiocese’s social services agency, has begun consultations with staff and union representatives around reducing their employer pension contribution rate with a view to reducing expenditure in that area.

The spokeswoman said that “in order to meet outstanding defined benefit commitments, a recent draft actuarial valuation recommended a future contribution rate of €520k annually”. This was “proving challenging in the current climate”.

She said that “cumulative reductions in funding amounted to € 1.4m in recent years”, at Crosscare. She also said “it was hoped to pay increments earlier this year - but the current economic climate following the pandemic has meant that this will not be possible in the short term”.