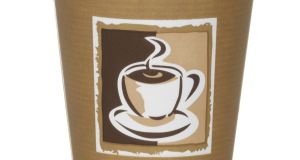 Petrol stations and coffee outlets will be asked to give people “free funky reusable coffee cups” and switch to biodegradable cups.

Technology will be central to a five-year plan adopted in Kerry to target the “persistent” problem of littering.

It will include new smartphone apps for litter wardens as well as mobile cameras in bogs and close-circuit television cameras in green areas of housing estates in Killarney which have attracted dumping. A database of litter black spots is being created using geographic information system (GIS).

Litter “can drag an entire area down” and it was a persistent problem, a council meeting in Killarney, one of Ireland’s tidiest towns, was told. Despite the scale of the problem, a litter management plan before the public for consultation for months in Co Kerry had received only two responses.

One of the responses was from the small Leith Triúigh Gaeltacht community near Castlegregory, citing a rising tide of discarded take-away coffee cups on roadsides in west Kerry. The second response was also from a Gaeltacht community – that of Iveragh in South Kerry – which is seeking better support for its waste management efforts .

Petrol stations and coffee outlets will be asked to incentivise people to reuse the cups as well as “giving people free funky reusable coffee cups” and switch to biodegradable cups.

Michael Gleeson, a Killarney councillor who is a volunteer litter picker on the N22, said “litter can drag an entire area down” and the council had to take action against the dumping of waste in housing estates in towns by installing cameras.

A smartphone app is being sourced to protect lone litter wardens and allow the county’s three full-time and 11 part-time wardens to better report and monitor litter and illegal dumping. The apps will link with the fixed cctv and new mobile cameras and will be in place by December next, as one of the first steps in the new five-year plan.

The mobile cameras will be in urban areas as well as in remote bogs and should see an increase in fines as well a reduction in the mounting problem of illegal dumping, even in beauty spots. Of 634 investigations into illegal dumping and littering last year, there were just 17 prosecutions and nine of these resulted in a conviction. In addition only 19 of the 66 on-the-spot fines issued in Kerry were paid. Three “Kerry Clean Days” over the past three years by thousands of volunteers have collected 128 tonnes of waste, with local waste company KWD disposing of the material, the plan said.

In addition, John Breen, the council’s most senior environmental official, warned about the growing problem of builders’rubble being left on roadsides. He also said a mechanism would have to be found by the council to tackle the storage of domestic refuse in attics, back gardens and spare rooms in some local authority houses.

“There is a direct correlation between waste and the economy. Construction waste is increasing on the road side – it needs to be brought home that this is waste and it needs to go to a licensed waste facility,” Mr Breen said.