Permission given to convert historic Belcamp Hall into apartments 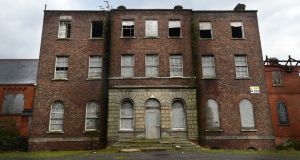 Historic Belcamp Hall in north Dublin is to be converted into apartments after Fingal County Council granted planning permission to develop the site.

The project spearheaded by developer Gerry Gannon will see the construction of 165 homes on a 15-hectare portion of the site surrounding the 18th century Georgian house, although the original application was for 260 units.

The council attached 53 conditions, including the omission of five blocks of apartments which are to be part of a separate application for the site on Malahide Road.

Built in the 1780s by Sir Edward Newenham, an MP for the area, Belcamp Hall was designed by Kilkenny-born architect James Hoban, who was also responsible for the White House in Washington.

It later became a boarding school, Belcamp College, before being bought by Mr Gannon as part of a €105 million deal in 2004.

A total of 122 two-storey houses, along with a number of apartment blocks, will be constructed on vacant land between Belcamp and Malahide Road, subject to further permission in some cases.

The proposals gained the approval of heritage organisation An Taisce as well as local TD Tommy Broughan, who described the housing as “desperately needed in Dublin Bay North and Fingal County”.

They did, however, attract objections from local residents concerned about right-of-way access to the 80-hectare site, and from the Irish Georgian Society which said the development would have a “significant negative impact on the architectural heritage of Belcamp”.

In a lengthy submission to the council, it added that “the loss of this landscape through the construction of inappropriate new development would constitute a profound loss in Ireland’s cultural heritage and our shared cultural heritage with Europe and America”.

1 Coronavirus: What we know so far about how Ireland is affected
2 Woman (38) appears in court charged with murder of Garreth Kelly
3 Coronavirus: Ireland plans for massive increase in tests
4 Woman convicted of disguising herself as grandmother to conceal murder
5 Dublin stabbing: Parking space was at centre of previous rows, gardaí told
Real news has value SUBSCRIBE