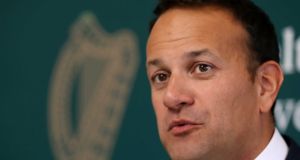 Taoiseach Leo Varadkar said the Government would “of course” have to first discuss the issue with Fianna Fáil. Photograph: Sam Boal/RollingNews.ie

Taoiseach Leo Varadkar has indicated the Government will increase carbon tax in the budget.

“We are very much of the view that if we are going to meet our climate change obligations then we will have to grasp the nettle in increasing the carbon tax over the next couple of years, but very much recognising that some people who are in poverty or who are the most vulnerable can be the worst affected by that, so there will have to be compensatory measures,” Mr Varadkar said.

He said the Government would “of course” have to first discuss the issue with Fianna Fáil, whose support is needed to pass the budget.

“But we think that is necessary as part of our climate change obligations.”

On the overall budget package, Mr Varadkar said the split between spending increases and tax cuts will likely exceed the 2:1 already agreed with Fianna Fáil, with more going on spending.

Speaking at a briefing for political correspondents, he said income tax cuts will be similar to last year, which saw some cuts in Universal Social Charge and an increase to the threshold at which people hit the higher level of income tax.

“People on very modest incomes pay the highest rate of income tax. The average person working full time in Ireland if you exclude students and people working part time work earns around €40,000 to €45,000 a year.”

Weekly welfare rates will also be increased, but the final figure has yet to be agreed.

“We are also working on proposals for a form of jobseekers for the self-employed,” Mr Varadkar added.

The Government is also expected to target the hotel sector for an increase in the special lower 9 per cent VAT rate in the October budget, as reported in The Irish Times on Saturday.

Under proposals being strongly considered, the full 13.5 per cent VAT rate would be restored only for businesses that sell “accommodation”, such as hotels, guesthouses and bed and breakfasts.