We celebrate winter solstice on December 21st. But that’s not always accurate 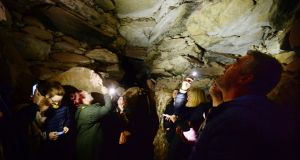 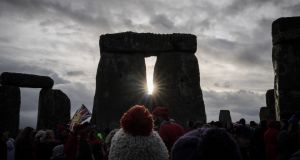 People look towards the sun as druids, pagans and revellers gather at Stonehenge, hoping to see the sun rise, as they take part in a winter solstice ceremony at the ancient neolithic monument of Stonehenge near Amesbury in Wiltshire, England. Photograph: Matt Cardy/Getty Images 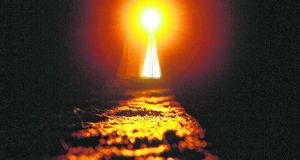 A stream of sunlight passes through the window box and along the passageway leading into the burial chamber of Newgrange during the 2006 winter solstice, 21st December. Photograph: Alan Betson

When exactly is the shortest day of the year?

December 21st is often considered to be the shortest day of the year and usually the date of winter solstice celebrations. However, the exact date of the shortest day in this part of the world varies every year.

Technically speaking, the shortest day occurs when the sun is tilted farthest from the northern hemisphere and therefore closest to the horizon. This is the day when the countries north of the equator receive the least amount of sun. Conversely, places south of the equator receive the most sunlight on the same day and experience their longest day.

However, as the modern calendar is slightly out of synch with the solar year of 365.2422 days, this shortest day can occur any day between December 20th and 23rd. But, what happens most often is that the shortest day is on December 21st or 22nd.

In 2019, the shortest day will be on Sunday, December 22nd, when we will have less than eight hours of sunlight.

Where does the term winter solstice come from?

The term solstice comes from the Latin word solstitium, which means sun standing still. On this day, the sun seems to stand still at the Tropic of Capricorn and then reverses its direction when it reaches its southernmost position as seen from the earth. For this reason, the solstice is called the sun’s turning in some languages.

The day after the winter solstice marks the beginning of the lengthening of days, leading up to the summer solstice on June 21st. Many people feel relieved once December 21st has passed but often the sense of the days lengthening will only be noticed from January onwards.

Where can I celebrate the winter solstice?

In Ireland, winter solstice is marked in various locations, the best-known of which is at the megalithic tomb in Newgrange, Co Meath. The dawn celebrations there are held on December 18th-23rd inclusive and are open to all. However, only the 20 people who have tickets can gain access to the interior of the monument on each of these days.

The magical moment – which occurs only if the sun is shining – is when a shaft of sunlight streams into the inner chamber. Staff at Brú Na Bóinne Visitors Centre, from where you enter Newgrange, point out there is no guarantee that weather will allow sunlight to enter the inner chamber on any of these days. To apply for tickets for next year’s winter solstice see newgrange.com/solstice-lottery.htm.The Hill of Tara is another popular gathering place for people at the winter solstice. People also gather at the Knockroe Passage Tomb in Kilkenny, at Loughcrew in Co Meath and at Carrowkeel in Co Sligo.

The Feast of Juul (from which we get the term Yule) is a pre-Christian festival of northern Europe. The Norsemen worshipped the sun as the wheel that changed the seasons. During the Feast of Juul, people lit fires to symbolise the heat and light of the returning sun, and a Yule log was brought into the hearth to conquer the darkness, banish evil spirits and bring luck to the coming year.

The Ancient Romans also celebrated the rebirth of the year with the seven-day Saturnalia festival, which started on December 17th. Saturnalian banquets were held to honour Saturn, the father of the gods.

Yalda or Shab-e-Chelleh is an Iranian festival which celebrated the longest and darkest night of the year.

How can I enjoy time outdoors on the shortest days?

Getting outside – particularly at the start of the day when the sun rises – helps to keep the spirits up, the mind clear and the body agile at this time of the year. The upside of such short days is that it’s much easier for people to experience sunrise and sunset.

Shirley Gleeson, nature and wellbeing consultant, says early-morning sunlight is also very beneficial for healthy sleep. Also, for people with seasonal affective disorder, the sunlight helps boost serotonin levels. “Wrap up warm in layers, as it is difficult to enjoy the outdoors if you are cold and wet,” she says.

Gleeson says the beauty of nature is always there – even though it may look stark in winter. “Consider the raindrops glistening in the early-morning sun, the crunch of the frost under our feet, the delight in feeling our noses cold in the crisp clean air and seeing our breath before us.”

What approach should people take to the dark days of deepest winter?

Gleeson says that by embracing the darkness, people can use it as an opportunity to slow down, rest, turn inwards and reflect on what’s important in their lives. “Use it as a time for introspection and give yourself permission to adopt a different pace of life. Modern society expects us to be on the go all the time, producing, achieving, striving to better ourselves. If we spend time in nature we will see that everything slows down, retreats, goes underground and hibernates. We should give ourselves permission to do a little of this.”

The poetry of mid-winter

Poets often best capture the energy and mood of mid-winter. And The Shortest Day, by English poet Susan Cooper, brings to mind the human need to “keep the year alive” by lighting candles, bringing evergreen trees and branches indoors and feasting with friends.

The Shortest Day, by Susan Cooper

So the shortest day came, and the year died,
And everywhere down the centuries of the snow-white world
Came people singing, dancing,
To drive the dark away.
They lighted candles in the winter trees;
They hung their homes with evergreen;
They burned beseeching fires all night long
To keep the year alive,
And when the new year’s sunshine blazed awake
They shouted, revelling.
Through all the frosty ages you can hear them
Echoing behind us – Listen!
All the long echoes sing the same delight,
This shortest day,
As promise wakens in the sleeping land:
They carol, feast, give thanks,
And dearly love their friends,
And hope for peace.
And so do we, here, now,
This year and every year.
Welcome Yule!

A new picture book of this poem, illustrated by Carson Ellis, is published by Walker Books