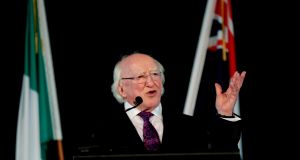 President Higgins speaking on the last day of his State visit to New Zealand. Photograph: Maxwells

President Michael D Higgins has said New Zealand and Ireland face a similar set of problems in tackling climate change and the two nations should not be afraid to work together to solve them.

Wrapping up his week-long State visit to New Zealand, the President spoke of the two nations possibly making joint proposals for entering particular sections of the Asian market and sharing information on the unique challenge agricultural economies present when combating climate change.

Ireland and New Zealand share many similarities, he said: a near identical population size, a sizable dairy export industry, and a deep love of rugby.

“Let us imagine dairy and in agriculture, generally, where you have the issue of carbon which has to be solved, it has to be addressed, and there will be an exchange of information there,” he said.

In terms of whether an “alternative set of trade agreements” is available through the commonwealth, he said that more short-term existing trade agreements “occupy the minds” of the people he had spoken to.

He siad “people are courteous but they wonder about the possibilities of a whole set of commonwealth relationships being negotiated through WTO and whether that is possible. But that is a matter for those who advocate solutions.”

At a speech at the University of Auckland on Friday, Mr Higgins said we should not underestimate the task of tackling climate change in the agricultural industry.

“Agriculture accounts for nearly a third of Ireland’s greenhouse gas emissions, and I understand somewhat more here in New Zealand,” he said.

Referring to the emissions trading schemes put in place to reduce fossil fuel emissions, he spoke about the challenges facing agricultural industries.

“These schemes exclude the emissions generated by pastoral farming, which due to our unique emissions profile, will require distinctive, novel, and sometimes difficult policy measures to be directed to dairy and beef farming, even as the temptation is now to increase our national herds to meet rising world demand,” he said.

Speaking about the Paris climate deal, Mr Higgins said pursuing efforts to limit the global temperature increase to 1.5 degrees above pre-industrial levels will not be easy, nor made without sacrifice.

He also spoke about the agreement of the Sustainable Development Goals in New York in September 2015. More than 193 states resolved to end poverty and hunger, combat inequalities in income and opportunity, to build peaceful, just and inclusive societies.

“We must not be dislodged or dissuaded from these objectives by any nation, no matter how powerful, that seek to eschew the global common good in the service of narrow sectional interests,” said Mr Higgins.

1 One hundred Irish retailers for all your online Christmas shopping
2 Level 5: Fines for house parties and breaching 5km rule, while permitted funeral attendance up to 25
3 Thirteen further deaths and 1,269 new cases of Covid-19 recorded in the Republic
4 Extra day to Dáil debate on extending State’s powers during pandemic
5 School ordered to reopen after closing due to Covid-19 fears
Real news has value SUBSCRIBE

Level 5: Fines for house parties and breaching 5km rule, while permitted funeral attendance up to 25 20:30
Schools should not reopen after midterm unless safety improves, say unions 19:34
School ordered to reopen after closing due to Covid-19 fears 19:30
Rescue operation under way to prevent freighter hitting rocks 19:22
Brian Hayes says he considered resigning over Oireachtas golf dinner 19:21