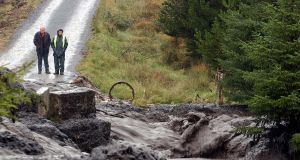 Two men look on as a road was covered by a landslide in Derrybrien, Co Galway in October, 2003. File photograph: Joe Shaughnessy

Ireland faces a minimum fine of €1.68 million and additional penalties of more than €12,000 a day if it fails to comply fully with a ruling from the Court of Justice of the European Union (CJEU), formerly the European Court of Justice, on the Derrybrien wind farm in south Galway.

The European Commission has confirmed it is taking Ireland back to the CJEU, the EU’s court based in Luxembourg, over Ireland’s lack of compliance with a ruling made in 2008.

The commission says although the Derrybrien wind farm was built on the Slieve Aughty mountains over 13 years ago, no “sufficient” environmental impact assessment (EIA) has been carried out under EU rules.

It says even at this late stage, a full EIA must be conducted, which must include full consultation with residents, industry and other relevant stakeholders. The wind farm would then be obliged to take whatever “mitigation” measures and remedial work that such a report recommends.

The wind farm was regarded as one of the largest in the EU when a landslide occurred during its construction in October 2003 by an ESB subsidiary, Hibernian Wind Power.

At the time, large areas of forest and peat up to a depth of 5.5 metres on the top of the Cashlaundrumlahan mountain had been removed,causing the 2km-long “environmentally devastating” slide, the commission says.

Fish were killed and waterways polluted when half a million tonnes of peat and debris was displaced.

The CJEU ruling in July 2008 was regarded as landmark, in that the court invalidated Irish law allowing local councils and An Bord Pleanála to grant retention for developments that failed to comply with the EU directive on EIAs.

The commission says Ireland has not honoured part of the 2008 judgment requiring a full EIA.

“The site could still benefit from mitigation and remediation measures, but these can only be identified after an EIA has been done. Ireland must, therefore, ensure that this happens,” it said.

The commission said it is requesting the CJEU to impose a minimum lump sum payment of €1,685,000 (€1,343 per day), and a daily penalty payment of €12,264, if full compliance is not achieved by the date when the court issues its ruling.

The Department of Housing, Planning and Local Government said it had been “in regular communication” with the commission on this matter and remains “absolutely committed to ensuring that an appropriate environmental review takes place”.

It said it had recently submitted an agreed national programme, and a programme of work could be “swiftly implemented” on receipt of a response from the commission.

Environmental Pillar spokesman Charles Stanley-Smith said his group welcomed the commission’s decision “on this serious issue” which, he said, “highlighted the catastrophic failure by our Government to adhere to environmental law”.