Transport and heat emissions holding back progress on decarbonising 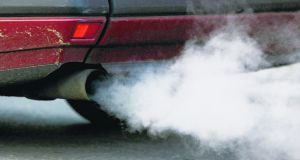 “While emissions from electricity decreased, we have a hill to climb if we are to make meaningful inroads in the other sectors,” says the Sustainable Energy Authority of Ireland’s Jim Scheer.

Significant progress in decarbonising power generation in Ireland is being undermined by increases in carbon emissions from transport and heating, according to the Sustainable Energy Authority of Ireland.

The energy sector continues to rely heavily on fossil fuels, it says in its latest report on energy-related CO2 emissions in Ireland.

The report shows such emissions declined slightly in 2018 even as energy use increased. But progress on using renewables in generating electricity is disguising growing problems in transport and heating both domestic and commercial buildings.

Critically, the overall reduction “was not enough to keep Ireland on track to meet long-term decarbonisation goals”.

SEAI head of data Jim Scheer said their analysis once again showed the scale of the challenge Ireland faced in reducing emissions associated with energy production. “CO2 emissions from travel and heating our homes and businesses increased again in 2018. While emissions from electricity decreased, we have a hill to climb if we are to make meaningful inroads in the other sectors.”

The data relates to 2018 primarily and pre-dates the Government’s climate action plan published last year. “The ambitious course of action plotted in that plan has the potential to turn these trends around. It’s important now that citizens, businesses and Government work together to deliver on those actions,” Mr Scheer stressed.

In 2018, transport was the biggest emitter of energy-related carbon emissions (40 per cent) – these include emissions from aviation but not shipping. Energy used for heat was next at 33 per cent and electricity generation at 27 per cent. They increased by 24 per cent between 2012 and 2018, in line with economic growth, while the sector “remains almost entirely dependent on fossil fuels”.

Private cars were responsible for the largest share of emissions from transport at 40 per cent but the largest growth was in air travel, up 8 per cent in 2018 to an all-time high.

Emissions from electricity generation fell in 2018 though electricity use increased. A reduction in CO2 intensity of electricity was due mostly to a 44 per cent decrease in coal because of a technical fault at Moneypoint, Ireland’s only coal-fired power plant, and a 16 per cent increase in wind-generated electricity. Zero-carbon renewable energy generated 33 per cent of all electricity in 2018, up from just 7 per cent in 2005.

Using renewable energy for heat, electricity and transport reduced emissions by 4.9 million tonnes of CO2 – equivalent to emissions from half of all homes in Ireland. Despite this, the carbon intensity of Ireland’s energy supply is 20 per cent higher than the European average due to greater use of high-carbon fossil fuels including coal, peat and oil.

“Reducing CO2 emissions from energy use requires increased energy efficiency and increasing the use of renewable energy in our energy mix,” Mr Scheer noted. “We need to tackle this urgently in every part of society. As citizens, we can play our part by changing how we use energy in our homes and how we travel.”

A wide range of Government supports were available via SEAI, which has supported more than 420,000 homeowners with energy upgrades and about 9,000 car-owners to purchase an electric vehicle. “Community-based action is also on the rise. People should get involved in the transition and avail of these and other supports where they can,” he said.

The results underline the need to swiftly implement the climate plan, with more than 180 actions to tackle the climate crisis across all sectors of the economy, the SEAI concludes.

The report is available at www.seai.ie/emissionsreport