‘I’m making sure every door and hatch is tightened down,’ says Kerry farmer 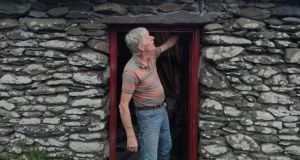 Sean Kennedy checking a shed in anticipation of Storm Lorenzo. “Everything has to be double-checked actually, just to be on the safe side”

Sean Kennedy spent Wednesday tying down everything on his 60-acre dairy farm at Doonshean, near Dingle, Co Kerry, in anticipation of Storm Lorenzo.

“I’m making sure that every door and hatch is closed and well tightened down,” he says.

Although nestled in a valley, previous storms have left their mark. “The roof of some sheds were lifted before. They’re tested every time [a storm] comes, so we’ll have to make sure they are okay.”

Ten years ago he lost a roof off a cow shed. “It just shifted. That was it.”

Mr Kennedy, who is secretary of the Dingle branch of the Irish Creamery and Milk Suppliers Association, was “up early” making his checks on Wednesday. “Everything has to be double-checked actually, just to be on the safe side.”

Kennedy admits he is “a bit anxious” about Lorenzo. “It’s meant to be gusty, and we just don’t know yet. It’s the gusting that would catch you. I’d be afraid of sheeting, sheet iron, galvanized sheeting taking off. It’s dangerous.”

Lorenzo will force his cows into shelter when they would otherwise be out “eating grass”.

He hopes the village will escape serious storm damage. “I will not venture out in it. No way.”