Advisory council says Ireland must continue to explore for gasfields 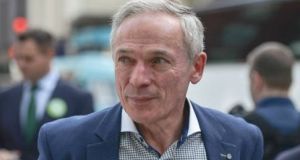 Richard Bruton: he said three-quarters of electricity would be suppled in the years ahead by renewables, but gas would be needed “when the wind doesn’t blow and the sun doesn’t shine”

Ireland must continue to explore for new gasfields because gas will be a key part of the State’s energy supply for the next 30 years, an independent expert body has insisted.

Without gas there would be “a serious risk to life and limb”, the head of the Climate Change Advisory Council (CCAC) , Prof John Fitzgerald, told an Environment Ireland conference.

The advisory council was strongly criticised by environmental campaigners recently after it told the Government to ban oil exploration but recommended that gas exploration should continue.

Defending the council’s decision, Prof Fitzgerald said a range of research showed gas-fired electricity would have to be part of the State’s energy mix over coming decades.

On balance the council decided gas-drilling could be useful, he told Environment Ireland, especially since a gas find would make little difference to Ireland’s carbon emissions.

He said gas was needed to ensure supplies and to help achieve net-zero carbon emissions within 30 years. Some political parties were making a big play on the issue, but were not accepting real actions that reduce emissions.

Existing gas pipelines with the UK provided security of supply for the State, he said, but this could change after the UK quits the EU in the months ahead.

Remembering the lessons of the 1956 Suez crisis and the second World War, he said the UK hogged oil supplies. By contrast, under EU law member states must share supplies.

Minister for Climate Action and Environment Richard Bruton said the Government had heeded the advisory council’s recommendation because gas was less damaging to the environment.

Nearly three-quarters of electricity would be suppled in the years ahead by renewables, but gas would be needed “when the wind doesn’t blow and the sun doesn’t shine”. Ireland would have no native gas after the Kinsale and Corrib fields end.

On bringing liquefied natural gas (LNG) into Ireland and potentially on to Europe via interconnectors, Mr Bruton said a base in the Shannon estuary has been a major EU-wide interest for six years. However, he said, this did not mean that the company behind the gas terminal would get preferential treatment and it would still have to fulfil planning and regulatory requirements.

Responding, Friends of the Earth director Oisín Coghlan said the absurdity of importing fracked US LNG having banned fracking in Ireland was “not lost on people” . The Shannon project was “a glaring inconsistency”.

Mr Coghlan said it was “really, really disappointing” that critical points highlighted in CCAC analysis about the impact of oil and gas exploration were left out in the letter the council finally wrote to Taoiseach Leo Varadkar.

Ireland’s ability to meet its climate change targets in 2030 and 2050 would be hindered if “ large reserves of oil and gas are brought ashore”, leaving the State locked into fossil fuels.

He said natural gas could help in the journey to lower emissions, but a straight swap from coal, peat and oil directly to renewables may be the more cost-effective option.

Meanwhile, Dublin People Before Profit TD Bríd Smith told a protest meeting that the Shannon Estuary project “will make plans for climate action redundant” if it goes ahead.

More than 40 TDs and NGOs have called on Mr Varadkar to take fracked gas import projects off this Friday’s EU meeting about major EU energy projects.

“If he allows for the approval of this dangerous LNG fracked gas he will be both silencing the voice of democracy in Ireland and supporting fracking in America for decades to come.”