I found this beautiful spider on my tomato plant; what is it? Readers’ nature queries 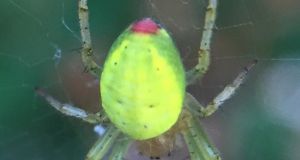 I found this beautiful spider on our tomato plant; what is it? – Jane Jackson, Greystones, Co Wicklow
The cucurbit spider, which is one of the smallest of the web-building spiders.

I was walking my pup in Blackrock Park and I thought she was after a stick. It turned out that there were hundreds of eels in the water and on the land. – Gillian Hughes, Blackrock, Co Dublin
It looks like the beginning of the eel migration to the Sargasso Sea. In autumn mature eels leave freshwater and enter the sea to begin their journey. In rivers they move downstream to the sea, but in a lake they may have to cross land to do so. Eels can travel and live for several hours on land when it is damp, and usually at night.

I have never seen one of these before. It was about 1½ inches long. I think it’s a mantis. Are they common in Ireland? – Denis Hickey, Little Island, Cork
It’s the speckled bush cricket. It is found where there is scrubby vegetation and has been reported in several locations on the east and south coasts of Ireland.

This moth appeared at our window; what kind is it and are there likely to be more of them? – Allie Wrixon, Baltimore, Co Cork
The death’s head hawkmoth is a rare visitor from Mediterranean regions. You were lucky to see one.

Could you put a name on this spider? He turned up in our kitchen. – John Drinane, Swords, Co Dublin
It’s Dicranopalpus ramosus, an invasive alien species of harvestman that spread from Mediterranean regions through western Europe into the UK in the last century, and into Ireland in the early years of this century. It’s an arachnid but a different family to the spiders.

We caught this fish in a rock pool in Clare. Is it a pipefish? – Ailís Trodd (5), Stepaside, Dublin
Yes, it’s the straight-nosed pipefish.