How can Irish people help stave off the end of civilisation? 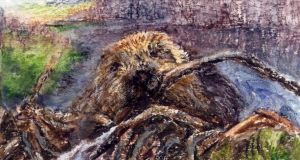 The beaver may never have reached Ireland, but it’s an alien we could well do with. Illustration: Michael Viney

In the world just now, Ireland’s conservationists can feel strangely divorced from what’s actually happening to the planet. Those specially involved in ecological research or protecting local habitats and wildlife can feel their optimism somewhat undermined by accelerating schedules of doom.

It’s Beckett’s turn again: “You must go on. I can’t go on. I’ll go on . . .” So I take up a new book, Rewilding (William Collins, €20), in the chance that its ideas might play some small part in staving off the end of civilisation.

It helps that its editor, David Woodfall, a UK conservationist and photographer, does not equate rewilding with bringing back wolves, bears and lynxes to the forests of these islands.

Rather, “the guiding ethos of the British and Irish rewilding movement is more nuanced” and its restoration of natural habitats makes a balance to the benefit of people. And topically, the organisation Rewilding Britain has just called for restoring a quarter of the UK, with subsidies for rewilding woodlands and meadows, bogs and marshes to absorb and store more carbon.

Woodfall interleaves his fine photographs with some 50 “real-life stories” of what rewilding can or could mean. All but half a dozen are from the UK and a reminder of its cultural traditions, generally more connected with the natural world.

The projects’ scale can be grand, as in the rewilding of Scotland’s Cairngorms and the Caledonian Forest. Others do, indeed, restore lost species, such as the beaver and the great bustards of the Salisbury Plain.

The beaver may never have reached Ireland, but it’s an alien we could well do with, as in the Welsh farmers using and breeding them for the animals’ dams to check floods and filter out slurry-soiled water.

Of the Irish examples, the buzzword “rewilding” has been most readily adopted by Co Mayo’s Wild Nephin National Park, in which 4,000 hectares of conifer forest must be freed of rhododendron in transition to a native wilderness.

Susan Callaghan, the district conservation officer, writes candidly of the current prospects: “The rewilding project is ambitious for such a large, highly modified area – and with no budget secured yet for conservation initiatives, or extra staff, the challenges can seem overwhelming.”

Catherine Farrell, Bord na Móna’s chief ecologist, tells of the changing view of bogs that sees them as “wildlife wonderlands and super ecosystems”. Her personal commitment to the rewilding of 30,000 hectares of bogs in the west and midlands has the backing of corporate policy.

But David Woodfall is right to conclude that much of the Irish effort in rewilding “has been left to a small number of inspired individuals, community groups and NGOs”.

In an essay on the Burren, however, the outstanding role of the Burrenbeo Trust and its dedicated leader, Brendan Dunford, go oddly unacknowledged. Prof Richard Moles of Limerick University merely grants in passing that “many farmers have agreed to work with conservationists in an attempt to minimise ecological damage”.

Mayo’s Lough Carra, with its crystal lens of a lime-floored lake and remarkable shores of orchids, was the finest of its kind in western Europe. Surrounding land, converted for intensified farming, leaks fatally enriching fertiliser and slurry into its waters. Ecologist Chris Huxley, long its champion, urges restoration of a ring of semi-natural habitat and more sensitive farming techniques.

But he asks: “Is this realistic? Can we really expect farmers to support this type of rewilding, after they have been told for decades that they must intensify and increase production?”

Trees on every farm

Just now they are digesting the hope of Minister for Climate Action Richard Bruton to see some trees planted on every farm. The scepticism one might have felt even a few years ago is no longer so strong, with real evidence of welcome for changes on farmland that make it more hospitable to nature.

Along with paid improvements individually chosen under Glas, the green, low-carbon, agri-environment scheme, come projects that span whole communities and their landscapes.

A pioneer is the locally led Bride project in east Cork, where, in a valley of intensive dairying, farmers are supplied with habitat plans and paid on results in the land’s wildlife gains.

More national in appeal is Farming for Nature, sponsored by Bord Bia’s Origin Green and widely backed by farming and conservation interests. In the process of an annual award, the public can vote on website videos of the work of shortlisted farmers, who then become “ambassadors” for green development.

In this, its second year, farmer nominations by a panel of more than 200 “heritage” specialists have doubled, with land ranging from seven acres to 1,200 acres of commonage. And it’s no surprise to find the Burren’s Brendan Dunford in the group of western heritage enthusiasts who developed the idea.

A first view of some 40 farming stories on offer for this year’s award is available online at farmingfornature.ie/nominees. These may not evoke the kind of “rewilding” adopted for some European mountains and forests, but they would all help restore Ireland’s farming to the life of the natural world.