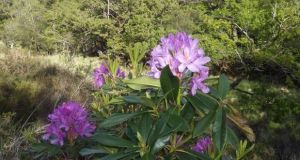 A plea is to be made at Kerry County Council on Monday for additional resources for Killarney National Park to help combat invasive species like rhododendron and other environmental challenges.

A motion will come before the last meeting of the current council calling on the Department of Heritage to provide extra staff for the park to help deal with deer management, fires and rhododendron growth.

Staffing figures released recently by the National Parks and Wildlife Service (NPWS), which manages the Killarney park and its unique herd of Killarney red deer, revealed that there were fewer wildlife rangers working in the Co Kerry park, a Unesco biosphere reserve, than there were in the much smaller Phoenix Park in Dublin.

The total number of rangers available to the whole of the Killarney district which includes the 10,236 hectare (25,293 acres) Killarney National Park and areas outside it like the Macgillicuddy’s Reeks is seven.

Killarney also has 20 general operatives, according to the NPWS, while the Phoenix Park has 15. There have been a number of retirements of rangers in Killarney, but none has been replaced.

Outgoing Fianna Fáil councillor John Joe Culloty, who is part of the Meitheal volunteer movement which has grown out of the Killarney Tidy Towns to tackle the rhododendron problem, said there were insufficient staff “to facilitate proper management” of the park.

Rhododendron has now infested not just the rare back woods in Killarney but popular nature walks like the Blue Pool.

There are also concerns over the management of the sika deer population, and over the ability of rangers to respond to fires.

During the major fire threat to the park at the end of March, retired fire fighter and former councillor Donal Grady said back-up for the fire service was no longer there because of cuts in staff.

Fifteen years ago, the fire service were able to call on “15 or 16 park rangers” along with other employees of the park to help fight wildfires.

“We don’t have spotters now,” he said.

The NPWS has said 13 extra rangers would be employed countrywide but it is not clear when and where they will be deployed.