Plans for restoration of Mountjoy Square released for public submission 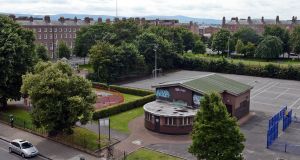 The Mountjoy Square children’s playground and buildings in 2014. The 4.4-acre park is a perfect square measuring 134m by 134m, and is the only one of the city’s five Georgian squares to have four equal sides. Photograph: Eric Luke

Plans for the restoration of Mountjoy Square park, Dublin’s only “true” Georgian Square, have been made available for public consultation by Dublin City Council.

The council wants to restore the remaining original elements of the park and “reconstruct” its Georgian design, including its central lawn, paths and oil lamps, without ending most of its current uses.

Mountjoy Square was laid out in 1790 and the railed park at its centre was opened to residents of the square in 1805.

The 4.4-acre park is a perfect square measuring 134m by 134m, and is the only one of the city’s five Georgian squares to have four equal sides. It was designed as a “beautiful and refined garden” around a central circular lawn with formal planting and defined paths.

It remained privately owned until 1938 when it passed into the hands of Dublin Corporation. Most of the significant changes to the park date from this handover, with the addition of public toilets, a nursery and a community building. The central lawn was bisected with tennis courts screened by fencing.

Later changes were made in the late 1960s when a park works depot was built. The most recent intervention was about 10 years ago when a new playground was installed.

Today the park is in two distinct halves. The western half remains as an open grass park, with the buildings and sports facilities concentrated in the eastern half.

Four years ago the council proposed a complete reinstatement of the original design, removing and relocating all non-original facilities at a cost of more than €8 million.

However it now proposes to retain the creche, community centre and depot, though the existing “hard-cover” tennis court will be removed and sports facilities relocated within the park, to make way for the central circular lawn.

The planned centrepiece lawn of nearly an acre could be used for events as well as allowing people to “kick a ball” or “ play with a frisbee” the council said.

Planting around the central lawn would form large beds with mown grass margins. The plan envisages the removal of 33 trees in a “dead-poor condition”. Their removal will facilitate the main path in the park.

Originally oil lamps were located at intervals around the park’s perimeter railings to light the surrounding footpath. The council plans to install replica lamps along the railings to match the originals which will use “flicker-type bulbs” to mimic the original oil lamp light.

“The construction period and establishment period of the central lawn will exclude all park users from the area for a period estimated at 12 to 18 months,” the council said.

It said it hoped the new layout would result in a reduction in “anti-social activity”. Submissions on the proposals can be made to the council until January 15th.