New Year’s Eve: Ringing in 2019 in Dublin and around the country

Dublin New Year's Festival hosts a pyrotechnics and laser light show at the Custom House at 7pm, including a faux countdown to allow smaller children to ring in the new year at a reasonable hour. 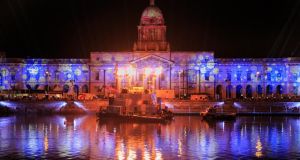 Spectacular events are promised for the Dublin New Year’s Eve festival with pyrotechnics and laser light shows illuminating the river and the sky at the Custom House twice during the evening.

The confusingly-named Liffey Lights Midnight Moment Matinee will see the lights display held at the river side from 6pm culminating with a faux “countdown spectacle”at 7pm, to allow smaller children to ring in the new year at a reasonable hour.

This will be followed by the real thing – the Liffey Lights Midnight Moment – which starts at 11.30pm followed by an actual midnight countdown. Both events are free, but ticketed for those wanting to get up close.

By Sunday afternoon the matinee event tickets had been snapped up, though the later event still had availability at nyfdublin.com.

Ticket-holders gain access to Custom House Quay, and while the lights will be visible further up and down the river, organisers warn views will be restricted.

Sandwiched in between the light shows, a concert headlined by Gavin James and Hudson Taylor, Wild Youth and Inhaler, will also be held at Custom House Quay, though this a charged event with tickets costing €29.90. The concert starts at 8pm and runs until midnight.

Revellers will have plenty of public transport options to get them in and out of the city on Monday night and into the small hours of New Year’s Day.

In addition to regular tram services, a night Luas will run from about midnight until about 3am, depending on stop location. Dublin Bus will run its Nitelink services until 4am but the regular bus service will finish at 10pm.

Met Éireann is predicting a reasonably mild evening for the festivities, with temperatures reaching 9 to 11 and not dipping much below 5 degrees nationally. It will also remain largely dry, at least in the east, though there could be a few showers in the west.

The weather will not be too much of a worry for the regional cities, with a notable lack of civic events organised to ring in the New Year. While commercial enterprises – pubs and hotels – will hold their celebrations, local authorities are demurring.

Limerick Council had last year planned a “New Year’s Eve Extravaganza” of illuminations and fireworks, but called it off on the 29th of December following the impending threat of Storm Dylan.

Although in the end the storm had largely passed by lunchtime, the council was clearly put off and decided not to go ahead with a celebration this year.

Limerick is not alone, however, with no official public events planned to usher in the new year in Waterford, Galway or Cork. Cork city’s Grand Parade ferris wheel, which has been running up to 9pm over the Christmas season will shut at 4pm on New Year’s Eve.

However, while the regional cities are eschewing New Year’s Eve this year, some plucky smaller towns are showing great seasonal spirit.

Clonakilty Mayoral Council in Co Cork has organised a public, community ceremony to welcome in the New Year starting at 8pm with candles, lamps, torches, lanterns, as well as “hand-held bells” followed by a “symbolic countdown” and singing of carols.

The official event concluding with a trumpeter leading the crowd in playing Amhrán na bhFiann at approximately 8.20pm, but the celebration is expected to continue with singing and dancing and an open invitation to any musicians wishing to volunteer their time and talents.

Not to be outdone, Dingle in Co Kerry will hold a fireworks display over the bay at 10pm followed by a marching band and new year’s count down on Main Street.