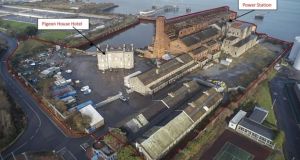 Five parties are vying to redevelop the old Pigeon House power station and hotel in Dublin.

Five parties are vying to redevelop the old Pigeon House power station and hotel on the Poolbeg peninsula in Dublin, which was recently featured as the backdrop to RTÉ drama Taken Down.

Dublin City Council sought expressions of interest to redevelop the seven-acre site surrounding the Georgian hotel as a creative and cultural “precinct” last May.

The power station, built in stages from the early 1900s, was used by the ESB until it was decommissioned in the 1970s.

The hotel is much older, dating from the early 1790s when it was built to accommodate increasing cross-channel passenger traffic.

Both buildings and the surrounding land were acquired by the council from the ESB in 2004 as part of plans for the redevelopment of the Poolbeg peninsula as a new urban quarter.

However, in the following years, the Pigeon House area was cut off from the main housing site, centred on the former Irish Glass Bottle lands, by the Ringsend sewerage works and later the incinerator.

The hotel and power station were not ultimately included in plans for a new strategic development zone (SDZ) at Poolbeg, with homes for about 8,000 people, which was approved by the council in 2017.

The old power station, one of the State’s largest protected structures, is largely in ruins with only one of its 12 chimneys remaining, although the council said the roof of its main building was mostly intact.

The Georgian hotel, also on the Record of Protected Structures, is in better condition as it has remained in use as offices, but both buildings need “extensive refurbishment”, the council said.

The hotel was used as the setting for a direct provision centre in the recent TV crime drama Taken Down.

The council said it wants see the site used for creative, technological and green industries which could include its use as a film studio. Proposals for a “large-scale visitor attraction” will also be considered, it said.

Five companies submitted expressions of interest for the site, all of which have met the criteria set down by the council. Briefing documents are to be issued to the parties shortly, ahead of a submission of final tenders for the project.

The successful bidder will be required to refurbish the protected structures as part of the redevelopment. The council said it could not give any details of the interested parties for commercial reasons.

However, Dublin Bay Studios, a company that wanted to build an €80 million Hollywood-style studio complex on the Poolbeg Peninsula, is not one of the bidders.

The company said the seven-acre site was too small to meet its production studio needs , but it said the location of creative industries “in close proximity to where we have proposed to develop the studios as part of the Poolbeg West SDZ would complement our activities very well and would support our vision which is to create a new creative cluster in Dublin’s Docklands”.

The company wants to build its studio on land owned by Dublin Port. The port company has said it intends to retain its lands in the zone for port use.

The Colour Out of Space: Take that, you art-horror whippersnappers
7