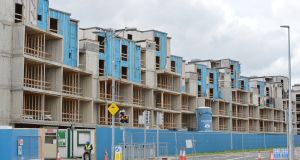 New fire-safety regulations due to come into force next month will be ineffective due to lack of proper enforcement, according to the Green Party.

It is bringing a motion to the Dáil on Wednesday calling for the setting up of an independent building regulator to oversee enforcement.

The motion calls for improved regulation of building standards and implementation of a remedial scheme to assist homeowners “to resolve serious structural and fire safety issues resulting from grossly-defective building standards in Ireland”. It also seeks the provision of new legal rights and remedies to protect homebuyers.

Green Party deputy leader and Dublin Rathdown TD, Catherine Martin, said: “In the rush to build the new homes so urgently needed, it is essential that this time it is done right and that all homes are built to an acceptable and safe standard.”

The motion was tabled some time ago, “but the tragic inferno at Grenfell Tower in London has brought this issue to the fore”, she added. The introduction of the Building Control (Amendment) Regulation in 2014 was described as an elaborate system of “reinforced self-certification”, she said, but it turned out to be ineffective. “Unfortunately, self-certification is still happening. That is not proper regulation and enforcement,” Ms Martin added.

Tens of thousands of homes in Ireland were affected by poor building work and failures in building control, while at least 30 multi-unit development across the country had been affected by significant defects, she said. “We have seen this in a number of developments, where fire-proofing wasn’t completed properly, problems with water ingress, homes blighted by pyrite and by the risk of defective and sub-standard concrete blockwork, which may affect thousands of homes in Donegal and Mayo,” Ms Martin added.

The overriding priority underpinning all construction must be the safety of residents yet under current rules and regulations “we could easily have a blaze like Grenfell in Ireland,” she said. “We have already seen examples inadequate fire safety in the likes of Priory Hall and Longboat Quay.”

Deirdre Ní Fhloinn, a housing regulation expert, lawyer and author of the motion, said a suitable model was operating successfully in Australia. A building regulator could join up the work of 31 building control authorities in Ireland and all building inspectors, she said – at present, the number of convictions for building defects was unknown.

A structure similar to the Food Safety Authority of Ireland would provide “credible enforcement”, she said. The new fire regulations on dwellings were welcome, but “lacked substance without enforcement”, Ms Ní Fhloinn added.

The economic case for a regulator was clear as the State was pay “tens of millions” in rectifying defective buildings.

Ms Martin said she was confident the motion would get significant cross-party support as the Rural Alliance, Sinn Féin and People Before Profit TDs had said they would back it.

At a Green Party press conference in Dublin, Killian Ryan, a homeowner affected by substandard construction in an apartment he bought under a local authority affordable housing scheme, said he was facing costs of between €10,000 and €15,000 for repairs, and a threat of eviction if he did not pay for them. His property, part of an apartment complex, developed problems with water ingress and fire-proofing.