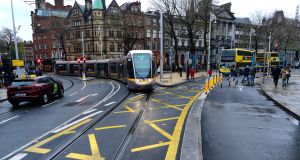 Dublin City Council’s head of traffic said there was an “urgent need” to reconfigure College Green to take account of increased numbers of pedestrians and cyclists “and the new requirement to cater for 55m-long Luas cross-city trams”.

Dublin City Council spent almost €1.5 million on the College Green plaza project, which was refused permission by An Bord Pleanála three weeks ago, it has emerged.

Dick Brady, the council’s head of traffic, said some €370,000 of the €1.48 million had been spent on the council’s involvement in the board’s hearing on the project.

At a council meeting last night a number of councillors said the project, which was refused permission due to the board’s concerns about the “significantly negative impacts” it would have on bus transport and traffic, must not be abandoned.

Plans for the pedestrian and cycle plaza would have seen a ban on all traffic, including buses and taxis, from accessing Dame Street through College Green.

The project would have stopped the east-west movement of traffic, preventing access to Dame Street from College Green, but would have maintained the north-south route which sees buses and taxis run in the same direction as the Luas line travelling between Nassau Street and Westmoreland Street.

In a report presented to councillors, Mr Brady said there was an “urgent need” to reconfigure College Green to take account of the increased numbers of pedestrians and cyclists in this area “and the new requirement to cater for 55m-long Luas cross-city trams”.

It was, Mr Brady said, a “long-held objective to develop a world-class civic plaza in College Green”.

In response to the refusal, the council was considering three principal options: to seek a judicial review of the board’s decision (which must be decided on by December); the submission of a fresh application to the board; or to “abandon” the proposal but go ahead with the “necessary alterations to traffic management arrangements in this area to address the competing transport demands”, using the council’s existing powers as a roads authority.

Green Party councillor Ciarán Cuffe said some of board’s criticisms of the council’s traffic management plans were “bizarre” and based on outdated thinking.

People Before Profit councillor John Lyons said Dublin Bus’s opposition had “dealt a fatal blow” to the project. “College Green is a really hostile environment. The onus is on us to see what we can do to save this plan.”

Independent councillor Mannix Flynn said the “failure” of the project “can be laid fairly and squarely at council’s hands . . . I commend An Board Pleanála for a very fine decision – for saving our city.”

Independent councillor Paddy Bourke also said he was “delighted” with the board’s decision. “This plan might have been an ego trip on behalf of some people.”

Sinn Féin’s Larry O’Toole said the plan “should not be abandoned, but an amended plan should be drawn up”.

Fine Gael councillor Paddy Smyth said the council should use its existing powers to restrict traffic in College Green.

Frank Kennedy of Fianna Fáil said he “couldn’t disagree more with Cllr Bourke. I don’t think it’s a vanity project in any way”.

The council must decide by early December whether it will seek a judicial review.