Garden feeders have led to a goldfinch boom. Is this a good thing?

Are we sustaining goldfinches at an increasingly artificial level? And does it matter? 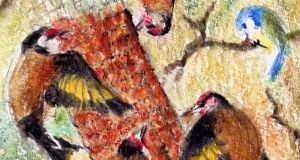 The peanuts for our bird feeders, bought at the Westport co-op, came from Argentina in a 50kg sack that took both of us to haul from the car boot into a wheelbarrow.

Bulk purchase saves money and time and fills the two feeders every couple of days for a winter or two. But well over half the nuts, at a guess, are eaten by goldfinches, gorgeously clustered, swirling and fighting for space at the tubes, perhaps 10 at a time, each little flock “a charm”.

A couple of decades ago, a single visiting goldfinch was a thrilling event. Now that they’ve caught on to easy feeding, instead of the wild thistle seeds for which their beaks evolved, their garden flocks support a flourishing international industry.

In the US the native goldfinch is mostly a vivid canary-yellow. And the tribal Carduelis talent for feeding upside down (like the top bird in my painting) has prompted new designs in tube feeders. These have perches and openings tailored specially to tail-up goldies, with the promise of frustrating the competing flocks of sparrow-like Mexican house finches.

The European goldfinch, Carduelis carduelis, has been introduced successfully to countries as far apart as Canada, New Zealand and Uruguay. Escaping aviary cages in the latter’s capital, Montevideo, it has spread to look for thistles in Argentina and Brazil.

In Europe the trapping of goldfinches for domestic colour and song goes back a century and more. Scotland’s Ian Niall wrote an affecting essay about his childhood encounters with an itinerant birdcatcher, a sinister figure in a flapping black coat, pushing a burdened bicycle. He was trapping goldfinches with a sticky lime made from holly berries and smeared on bushes and thistle heads, with a decoy bird calling from a cage below.

A visit to the caged birds of the old Dublin bird market also moved me to a poem, published in this newspaper in 1958. It began: “There would be something doubly wrong / About a market selling birds in cages / That viewed the hills and other birds / Free to their own trees and refuges . . .”

The market, in an alley near Francis Street, was thronged on Sunday mornings, selling what one trusted were songbirds bred in captivity. It was sheltered for a while in the shadow of Molyneux House, a new Sam Stephenson office block, and still survives in nearby Peter Street. These days, “mule” goldfinches for sale are captive-bred hybrids crossed with canaries.

The trapping and export to Britain of wild birds – goldfinches, skylarks and linnets – flourished rurally in the lean early years of the Irish Free State. The notorious extent of the trade produced the first attempt at statutory wildlife conservation in the Protection of Wild Birds Act of 1930.

Opposing it, a young Dublin politician, Seán Lemass, TD argued: “If the economic situation becomes better, we can then afford to indulge in luxury legislation of this kind, but we must put the necessities of human beings before those of wild birds.”

The Act was passed, however, and today BirdWatch Ireland, celebrating its 50th year, can list goldfinches among the Republic’s top 20 garden birds. And this month it reports that the lesser redpoll, a small brown finch with a red patch on its forehead, is beginning to turn up in their company.

Is this novelty, however, a totally good thing? As I fill the feeders and hang them up yet again, the finches and house sparrows retreat to our hedges and trees. But, thinking ecologically, are we now sustaining goldfinches at an increasingly artificial level? And does that matter a damn?

In the UK the British Trust for Ornithology also reports that goldfinches are “booming” in gardens, helped by commercial diversification in bird food and feeders. I’ve not, so far, spotted any “upside-down” feeders on the BirdWatch website, but Irish and British bird lovers have been upgrading the goldfinch diet to plastic tubes of the small, oil-rich nyjer seeds from Africa.

The trust, far from worrying about “too many” goldfinches, thinks garden feeding stations are increasingly important, as intensive farming reduces the supply of natural weed seeds. In much of Ireland, too, the vast hectarage of rye-grass grazing leaves little room for thistles and docks. Only here in the west, perhaps, can one feel that non-stop garden feeding of goldfinch gangs is abetting their dereliction of ecosystem norms.

The notion that the feeders are rescuing wild birds from winter starvation, or making up for the dwindling of natural habitat, is virtuous but can be highly artificial. We feed birds outside the window because that gives us enjoyment, part of which is some connection with wild nature.

The winter flocks will soon disperse, leaving one or two pairs to nest in our trees. I love the way they sing from high twigs, swivelling from side to side to spread the word. For such pleasure in the few, it’s been well worth feeding the many.