Fuschia bushes a promising habitat for the elephant hawkmoth caterpillar 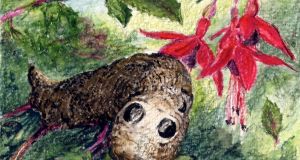 The elephant hawkmoth caterpillar. When alarmed, it pulls in the snout and puffs up its eye-spots to look as much like an angry snake as a caterpillar can. Illustration: Michael Viney

The phone camera is now a third eye for many of this newspaper’s readers, offering a whole new connection with the natural world. It is often focused, understandably, on the small and immobile – the bug on the leaf, the moth on the wall, the strange fly on the window.

The sharp definition at ultra-close quarters is a great boon of digital photography and can produce revelatory images. The plea for identification addressed to Eye on Nature is often a sharing of wonder and aesthetic delight as much as a need for a name. And it can carry another, unwritten, question: “What’s it for?”

All living things interact, in some way, with others in the intricate fabric of the planet’s life, if only in eating and being eaten, but none was bestowed with purpose. Accepting the “is-ness” of the natural world, produced by millions of years of evolution and environmental interplay, is basic to biology. That needn’t stop it being wonderful, such is the reward of human curiosity.

Among the season’s photographs emailed to Eye on Nature are those of elephant hawk caterpillars, among the most arresting specimens of “is-ness” any garden is likely to produce.

Ireland’s largest caterpillar, up to 7cm long, has the sheen of a soft velour, patterned with dark brown moth colours like a 1920s sofa. Its “elephant” feature is a snout at one end (mothsireland.com offers a good close-up). When alarmed, it pulls in the snout and puffs up its eye-spots to look as much like an angry snake as a caterpillar can.

Like so much in nature, it’s most likely to be found by chance, or brought in as a plaything by family cat or dog, Mid-August is a peak period, and a garden with fuchsia bushes (an important food plant) is a promising habitat. Another is a thicket of rosebay willowherb, flowering pinkly just now on many rural roadsides.

As someone walled in by fuchsia bushes, it might be thought I could go out and gather any number of the caterpillars for inspection. But they tend to spend the day very low down and on the underside of leaves, to minimise attack by birds. At my age, I’d need a stick with a mirror, like one of those yokes for checking under cars for bombs.

More people seem to come across the caterpillar than ever notice its progenitor, the elephant hawkmoth itself. That’s a pity, as the moth is a beautiful little arrowhead of bright pink and gold wings. But it seeks its nectar in flowers by night, able to tell their colour even by starlight.

Not that the bright, long-tubed honeysuckle that fits the hawkmoth’s long tongue so especially well would take much finding. But the really important plants of its life are chosen to feed its caterpillars, not itself, and neither rosebay willowherb nor fuchsia exactly shines in the dark.

Soon after a ghostly midnight copulation, which can last up to two hours, the female starts laying her glossy green eggs, continuing for several nights until she has deposited about 100, one by one. Unless snared by a huntsman spider she has perhaps five weeks of life in early summer; by the time her caterpillars emerge she has left the scene.

One way of meeting the moth is to take the caterpillar as a lodger, feed it with fuchsia leaves, and wait until it pupates and the moth eventually emerges. In June, Eye on Nature was sent a video of the event by a family in Dublin whose children had waited eight months for “Nellie”, kept in the kitchen, to complete her transformation.

Fuchsia magellanica, the basic shrub, came from the southern Andes and grows well in the east of Ireland, where blackbirds eat its dark berries. The bush of western hedgerows is Fuchsia magellanica “Riccartonii”, a plump-flowered hybrid developed in a Scottish nursery in the 19th century. It grows from any twig pushed into the ground, but its fruit drop too early to develop seeds.

Moths and butterflies are often highly selective in the plants that feed their caterpillars (white butterflies on brassicas, peacocks and tortoiseshells on nettles, and so on), but I have not found the elephant hawkmoth, Deilephila elpenor, keeping company with fuchsia in Chile or Argentina. It is considered a species of Europe and northern Asia.

Gardeners in South Africa, however, grow fuchsias in some diversity, and – unexpectedly – complain of the same species of caterpillar. They appear in February, in the southern summer, and members of the Western Cape Fuchsia Society are advised on their destruction.

Once the leaves start showing bites, says the society’s website: “The only effective remedy is early diagnosis so that you catch and dispose of them before too much damage is done; pay your sharp-eyed grandchildren to do so!”

None of that nature-loving Nellie nonsense among the fuchsia fanciers of the Western Cape.