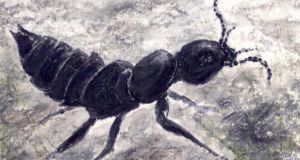 Raking up some old lettuce leaves in the polytunnel, I disturbed a ground beetle, survivor of this fitful furnace of a summer, and cheered it on its journey to another shady crevice in the soil.

It was black and quite humdrum and nothing to match the photogenic individuals of Coleoptera (the beetle genus) that readers have been finding worthy of a query to “Eye on Nature”.

Records from habitats as disparate as shorelines and mountain tops (where one ground beetle can gleam in an exquisite violet) have also joined the gallery.

There are more than 2,154 native species to find, about half the total for these islands as a whole. From pond whirligigs to screech beetles, tooth-nosed snout weevils to long-toed water beetles, their groups number more than 100.

Their Irish species are some of a million insect reference specimens pinned in the trays of the Natural History Museum in Dublin, their often vivid colours quite undiminished by age. “God”, in one enduring observation, “must have had an inordinate fondness for beetles” (not Darwin, for all his youthful beetle mania, but JBS Haldane, revered British geneticist, Marxist and wit).

The biggest Irish family are the rove beetles, of which a special Irishness, I feel, attaches to the dearg a dhaoil, rather than the “devil’s coach horse”, by the music in its name. It is also distinguished by the ability, having landed, to cram its wings back under their sheath (the elytra) by wriggling its abdomen, rather than folding them like an umbrella - an example of “coleopteran origami”, as one admirer put it.

Coleoptera means “sheath-wings”, and the flight of beetles distributes them to new abodes: it’s how the great diving beetle, for one, arrives in a new garden pond. But sometimes, massed squadrons of beetles in the air can reach alarming numbers.

One of the earliest “plagues” described in historical Irish natural history was a series of mass migrations of cockchafer beetles – maybugs – in the decade from 1688. They arrived in Connacht on warm winds from Spain and flew about “with a strange humming noise, much like the beating of drums at some distance, and in such vast incredible numbers that they darkened the air for a space of two or three miles square”.

The stubby wings of ladybirds can also lead them into migrations and misadventures, not yet fully understood. As some entomologists explain, long hot summers that multiply plant aphids can explode the populations of ladybirds, their predators. When they reproduce, their voracious larvae may eat all the aphids on drought-stressed plants, leaving themselves, as grown beetles, with no food.

Starving swarms of ladybirds then take off in search of nourishment and their subsequent mass appearance at beaches is a well-known natural phenomenon. In southeast England, for example, the long, hot summer of 1976 put an estimated 23 billion seven-spot ladybirds on the wing, enough settling on bare-skinned bathers and other prominent objects to produce substantial panic. How far the beetles decide where they’re going depends on the wind is a subject for debate.

A greater ecological concern in Ireland, as in Britain, is the threat from the harlequin ladybird, Harmonia axyridis, an Asian beetle that has now spread through Europe and parts of North America.

Initially introduced for the biocontrol of aphids, it has emerged as a misguided predator of other ladybirds. It can also prove a major household pest in winter, massing in clusters to hibernate in the exterior crevices of buildings.

In Britain, its meteoric expansion produced sightings from Essex to Orkney in only four years. The first specimen to reach Ireland was found in 2007 among imported celery, but subsequent records in the wild, from Cork and Kerry, Dublin, Belfast and elsewhere, have suggested multiple introductions.

In Britain, it has been preying on the eggs and larvae of two-spot and 10-spot ladybirds and outcompeting native ladybirds for food. Its threat to Ireland’s 18 native species has prompted a widely-supported citizen sightings campaign and all-Ireland ladybird research project.

Run by Gill Weyman of University College Cork, it is readily accessible at biology.ie, where there are identification sheets of Irish ladybirds and the harlequin in all its varied liveries and stages.