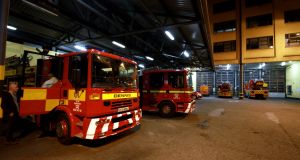 Dublin Fire Brigade on Pearse Street: No structures similar to Grenfell Tower were found during a review and the cladding and insulation used in the west London building have not been identified as a significant risk in Dublin. File photograph: Nick Bradshaw

Hundreds of Dublin’s non-residential buildings greater than six storeys in height are set to be examined under a Dublin Fire Brigade safety review in the wake of the London Grenfell Tower fire.

The expanded review follows an examination of residential apartment blocks and buildings of the same height – 18m or higher – in Dublin in recent months.

The investigation was to see whether the properties had the same insulation and cladding that caused the London inferno that killed at least 80 people in the 24-storey Grenfell building last month.

Dublin’s chief fire officer, Patrick Fleming, said that more than 700 residential buildings had already been reviewed and that the fire brigade had been writing to management of a small number of developments as a precautionary measure. He has declined to identified the properties in question.

No structures similar to Grenfell were found during the review and the cladding and insulation used in the west London building – an aluminium composite material – had not been identified as a significant risk in Dublin.

“This [review] has confirmed that there are no Grenfell comparable buildings in the area,” he said. “However, I would encourage management companies to ensure that all fire safety systems installed are properly maintained and good fire safety practices and housekeeping are in place.”

The management companies responsible for the properties have been asked by the brigade for a fire safety assessment on their external wall construction and safety systems installed in the building.

Cladding material used in the construction of the Grenfell is believed to have been a contributory factor in the fire spreading so fast in the June 14th blaze as the gap between the cladding and the building created a chimney-like duct feeding the flames quickly up the building.

Mr Fleming said the fire brigade had received legal advice on what legislation it should use to address fire safety concerns around overcrowding in private rented accommodation. He has described the legislation covering the enforcement of fire safety controls in overcrowded houses and apartments as “poor” and “difficult”.

Last month, Minister for Housing Eoghan Murphy extended a review of the use of cladding products in residential buildings taller than six storeys in Dublin to the entire country.