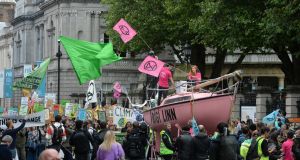 Dublin’s first disruption by Extinction Rebellion’s week of action has begun with a coffin adorned with the earth carried from Heuston Station in a funeral march to Government Buildings.

The group has pledged a week-long campaign of civil disobedience in the capital aimed at pressurising the Government to do more to tackle the climate emergency.

The disruption seeks to shine a light on climate breakdown and the biodiversity crisis and will see Extinction Rebellion Ireland (XRI) members join like-minded groups in other cities to stage an international “Rebellion Week”.

The environmental protesters are visiting every Government department building to hand in a letter, signed by more than 200 academics in support of Extinction Rebellion’s actions.

“The Irish Government is complicit in ignoring the precautionary principle, and in failing to acknowledge that infinite economic growth on a planet with finite resources is not possible,” the letter reads. “Instead, the government willingly has implemented policies that allow greenhouse gas emissions to rise and biodiversity to collapse.”

The group planned to visit ery official building on Kildare Street and move on to Merrion Street to the Department of the Taoiseach.

Hundreds of protesters congregated outside Leinster House in the centre of

Dublin to leave the coffin carrying the earth at the Government’s gates for a minute’s silence and a poetry reading.

Protesters held signs that read “Rebel for life”, “The oceans are rising but so is Carlow” and “Time is running out”.

Oireachtas and will travel up Kildare Street to highlight rising ocean levels.

XRI argue that conventional approaches of voting, lobbying and petitions have all failed because powerful economic and political interests prevent change.

It is inviting people to join them in “non-violent, disruptive civil disobedience”.

The group is promising to hold “peaceful, family-friendly actions” which “will bring society to a standstill and force governments to finally respond appropriately to the climate emergency before it is too late”.

Extinction Rebellion (XR) is a non-violent socio-political movement founded in London last year to protest and to demand action against climate breakdown with acts of civil disobedience leading to arrests central to its campaign.