ESB whistleblower got ‘nothing but stress’ by speaking out 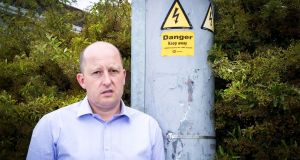 Séamus O’Loughlin: ‘I began to lose faith and trust in the process.’ Photograph: Keith Wiseman

An ESB whistleblower who made a series of protected disclosures alleging safety and management failings at the utility will tell an Oireachtas committee this week he went public with his concerns after he felt the company rushed him to sign a termination agreement within three days.

Séamus O’Loughlin, an ESB Networks engineer with more than 25 years experience with the company, made 10 protected disclosures to Minister for the Environment Richard Burton in January this year. He alleged a range of safety issues for staff and members of the public and also environmental damage. One of the disclosures deals with how Mr O’Loughlin was treated by the ESB after he began raising the issues.

“I have gained nothing from this. Nothing, except immeasurable stress for me and my family,” said Mr O’Loughlin. “I found poor practices and wrongdoing and I just wanted to resolve it swiftly. Front-line staff were raising these issues and venting their frustrations with me. I just wanted the issues dealt with.”

He will appear before the Oireachtas Committee on Communications, Climate Action and Environment on Wednesday to discuss his concerns. These include the leaking of up to one million litres of insulating oil from underground electricity cables in Dublin over the last 20 years.

However, the ESB told The Irish Times “it is important to note that the cable insulating fluid is readily biodegradable”.

The leaks are being investigated by the Environmental Protection Agency.

Mr O’Loughlin will tell the committee he spoke to the media including RTÉ’s Prime Time Investigates after losing faith in an ESB mediation process. And he feels penalised for seeking to raise and address safety issues brought to his attention.

How did the ESB react?

Mr O’Loughlin received a written caution and in May 2018 a formal disciplinary complaint for “raising issues in an inappropriate way and failing to utilise internal procedures”. He has been in mediation talks with his employer which led to the offer of a termination agreement from the ESB.

“I felt I was being rushed into signing off on a termination package within three working days,” Mr O’Loughlin will tell the committee.

“In addition, I was very concerned and anxious when fundamental elements of the termination agreement were shared with a potential external employer in the safety and electrical sphere without my consent during the three days when I was reviewing the package.

“This I felt severely compromised my future employability within my chosen industry. I began to lose faith and trust in the process.”

He said he opted not to accept the termination agreement as he could not secure adequate independent legal and financial expertise to review it within that time frame.

Since details of his protected disclosures emerged in the media, Mr O’Loughlin said some colleagues had thanked him for raising the issues. Others had expressed annoyance, particularly those who, Mr O’Loughlin claims, have seen cuts to their overtime since the beginning of the year.

“Speaking out has taken a far bigger toll than I ever expected. My mental health has suffered, my family has suffered. That said, I don’t regret speaking out”.