No-deal Brexit a threat to nature in Ireland, committee hears

Barrister calls for prioritisation of island-wide regulation in negotiations 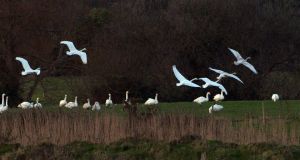 An Oireachtas committee on the implementation of the Belfast Agreement has been warned of the potential impact of a no-deal Brexit on Ireland’s wildlife and environment. File photograph: Cyril Byrne

A no-deal Brexit would pose “a major threat” to nature and the environment on the island of Ireland, an Oireachtas committee on the implementation of the Belfast Agreement has heard.

The UK leaving the European Union without a deal could pose a challenge to maintaining existing safeguards in these areas, barrister Alison Hough warned TDs and Senators.

Ms Hough said that Brexit posed “a major threat to nature on our small single biogeographic island without guaranteed island-wide standards for tackling the likes of invasive species and hazardous waste”.

Ms Hough was addressing the committee on behalf of the Environmental Pillar, an alliance of 26 NGOs from the State, on a report carried out on behalf of it and Northern Ireland Environment Link.

She said regulatory divergence between the two jurisdictions or uneven enforcement “represents the biggest threat to maintaining the environmental co-operation required” under the Belfast Agreement.

Ms Hough said firming up structures set up under the Belfast Agreement would minimise negative impacts arising from the removal of common EU regulatory standards.

She said that those who drafted the agreement clearly understood that the island’s shared landscape and ecology were the “bedrock” of the core objectives of peace, prosperity and protection of human rights.

“They understood what was at stake if we did not preserve our shared environmental heritage, in terms of the peace process, economic growth and social wellbeing of the people of both Northern Ireland and Ireland.”

“Peace is not to be taken for granted, and is reinforced on a daily basis by the contacts and interactions that occur across communities. These interactions are so often framed in, and by, our shared and common environment. Brexit cannot be allowed to threaten this.”

“This lack of a controlling body could mean looser implementation of environmental rules and an inability to prevent runaway cross-Border pollution,” Ms Duggan added.

In the long-term, she said “dynamic regulatory alignment of environmental standards” will be crucial to protect flora and fauna.

“If we are to avoid environmental harm and damage to the island . . . then there must be dynamic alignment of rules on either side of the Border. And this is not just a matter of protecting the environment, it is about maintaining the peace, prosperity and protection of the communities who enjoy and share that single-island environment,” she said.

Ms Duggan said there are several shared North-South protected nature sites that are protected by EU directives on birds, habitats, water and environment.

“With a no-deal these sites could be severely undermined without a clear way to continue the protection and monitoring [them].”