One Change: It may be a little more expensive, but it supports independent growers, and the environment 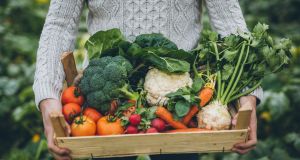 We should all try to buy fruit and veg from local farmers. Photograph: iStock

Ireland imports 80 per cent of its food, but is also the second-largest exporter of infant milk formula to China, and the fifth-largest international beef exporter. To understand why is to understand globalisation. Providing local food for local people is not a priority for the international corporations or global food conglomerates that currently control the agribusiness sector. For them, maximising shareholder return is the primary concern.

It means the sustainability of farming practices is of little interest either, as they can always move on to new territories once our soil has been eroded or exhausted, and our lakes and landscape polluted. It’s why after decades of intensification and industrialisation agriculture, the environment secretary in Britain can claim that the country now has just 30 to 40 years of soil fertility left.

One change we can make to help the development of a different model in Ireland is to join a local Community Supported Farming (CSA) initiative, in which consumers work in partnership with a local farmer by paying in advance for produce, so that the responsibilities, risks and rewards of farming are shared.

There are currently about 10 CSAs listed on communitysupportedagriculture.ie, most offering a weekly box of organic and seasonal vegetables and fruit, year-round, for about €600-€800.

But there are countless other farmers around the country who are keen for an opportunity to deal directly with local consumers, rather than having to sell their produce – for a fraction of its worth – to business conglomerates who can drive down prices by monopolising the market.

Even just 30 families paying €700 a year for all their vegetables and fruit brings €21,000 to a farmer, which immediately makes small-scale, mixed-horticulture farming viable, as farmers can earn more by selling excess produce at farmers’ markets or to local restaurants. There is further profit to be made from the sale of eggs and poultry.

This localised, diverse farming was how food was always produced until international seed and chemical fertiliser behemoths began luring farmers towards new soil-depleting practices, with the promise of increased profits – not admitting that it was at the expense of the health of the soil and the surrounding environment.

To ensure systemic change occurs at a European level, join Talamh Beo, the Irish chapter of Via Campasina, a pan-European movement that supports small, local farmers to produce food for the people, rather than profits for multinationals. They have a strong voice in the European Parliament, and are best positioned to break the stranglehold that big business interests have on global agriculture. talamhbeo.ie