After nearly two years of exhibitions, events, and community gardening, the Smithfield Art Tunnel is set to close when its lease expires next month. Videro : Bryan O'Brien 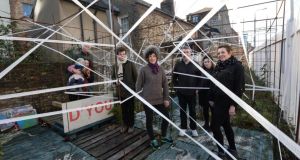 Smithfield Art Tunnel, a community garden and open air gallery set on a scrap of unused land in Dublin city, opened two years ago and will soon be no more.

The final exhibition opens today and a plaintive Facebook post this week read, “Come see new installations by Paul Quast and Michelle Bourke-Girgis… Sadly the lease for the land has not been extended. Come and celebrate the end nonetheless.”

That lease will expire on March 10th and the team behind the garden will start dismantling it later this month.

It will be a sad task for Sophie von Maltzan, a landscape architect and artist from Berlin. When she moved to Ireland 10 years ago she was struck by the different attitudes here towards public spaces. “People in Germany are very much aware that the public space belongs to them and they’re going to make more use of it,” she says.

In 2009 she won an Irish Landscape Institute award for a low-concrete, inexpensive residential garden suitable for “growing vegetables, playing and living” in the city centre. Later she asked Dublin City Council for a small site on which to exhibit it.

The council returned with a long and very narrow patch of land beside the Luas tracks in Smithfield. Von Maltzan was told it belonged to a local business but its poor condition put it at risk of being added to the derelict sites register. She “immediately realised” it wasn’t appropriate for what she wanted but saw potential in it nonetheless.

With the Luas shuttling tens of thousands of passengers past the site every day, von Maltzan thought it would make a good open air gallery for amateur artists.

So she signed a two-year lease, believing the land owner would extend it after two years. That turned out not to be the case, however, and now the end is nigh for the diminutive community park.

“It’ll be really sad,” says von Maltzan of the imminent “building down” process. But the team are prepared to do it without creating a fuss so as not to jeopardise similar projects in the future. And von Maltzan would like to see similar projects because this one has had “a huge response”.

She also believes projects like this can help address the issue of vacant city-centre sites. A recent survey by Dublin City Council showed almost 90 per cent of Dubliners wanted unused, vacant or derelict lands in the city brought back into public use. The considerable success of Granby Park, a temporary park set up on a vacant site in the north inner city revealed a public appetite for community areas.

The Smithfield Art Tunnel was set up at a cost of €7,000. About €3,000 of that came from a drinks firm promoting a music festival but the remaining €4,000 was crowd sourced with online donations. “It was great, we got 100 different parties giving money through fundit.ie,” von Maltzan says.

Local businesses were particularly generous. Previously the site was little more than a fence with concert hoardings and uninviting “rat infestation” warning signs. So it was in the businesses’ interest to see something a bit nicer go up in its place.

Since it opened, the site has hosted numerous events and exhibitions. The local school uses it as a community garden where they plant vegetables, hundreds of people visited during the last Culture Night and in the summer locals who didn’t have their own gardens came down to dig in.

“There are 320 derelict sites around Dublin… most of them are actually tiny like this”, von Maltzan says, adding that she hopes the project will encourage other neighbourhoods to get some money together and do something similar because “people hate to see derelict sites, they know it’s bad for their businesses, their neighbourhood and it makes them sad”.