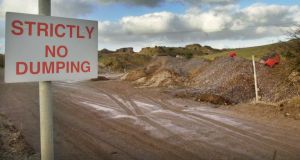 Cars dumped at Blessington, Co Wicklow near the site of an illegal dump. Photographer: Dara MacDonaill

At the weekend I took a load of junk from the garden shed up to the local recycling centre. Use of the Ballyogan facility costs €30 per car. Of course, there are always cheaper options. I could have headed instead for the Dublin mountains, found a quiet spot and dumped my detritus there instead.

Moral scruples apart, the prospect of a €3,000 fine or a 12-month prison term tips the scales against a moonlit fly-tipping escapade.

The “polluter pays” principle is a concept most people accept as self-evidently reasonable. It is also a strong deterrent to excessively wasteful practices. Yet this is almost precisely the opposite of how the world’s major industries operate today.

This is hardly surprising. Deregulation and the globalisation of capital has made it easier than at any time in history for industries to maximise profits while washing their hands of the messy “externalities”.

It’s an axiom in business that what is not measured cannot be managed. And the world’s most egregious non-measurement is the impact on “natural capital” of human activities.

‘Unpriced’ ecology
Natural capital is defined as ecological services – such as clean water, biodiversity and a stable atmosphere – which businesses benefit from but, as these are “unpriced”, do not pay towards.

The UN’s Economics of Ecosystems and Biodiversity (Teeb) commissioned a major report to quantify these, and the results are simply staggering. When economically costed, natural capital is being consumed, degraded or exhausted with a price tag of $7.3 trillion annually. To grasp the enormity of this figure, think of it as more than 100 times greater than the €64 billion the Government has sunk into our toxic banks.

The study found that most of the world’s “high-impact” businesses are, in fact, hopelessly insolvent when the true costs are included. For example, coal-fired power generation in eastern Asia and the US generates $690 billion in annual revenue but the environmental price tag is $768 billion – or more than $70 billion greater than the entire gross revenue.

Cattle ranching and farming in South America earn $16.6 billion a year but their impacts run to $350 billion – or 19 times greater. Wheat and rice farming in southern Asia generate revenue of about $100 billion but deplete $500 billion of natural capital in the process.

“We are stealing the future, selling it in the present and calling it GDP” is how ethicist Paul Hawken famously described it.

By far the biggest contributor to our annual overconsumption of natural capital is the emission of greenhouse gases. The study values the social cost of emitting one tonne of CO2 at $106. Annually this comes to a whopping $2.7 trillion to account for present and future damage from climate change. Worryingly, the study excluded costing for “catastrophic events”.

Depletion of global fresh water and land use contributes another $3.7 trillion in annual losses imposed by unsustainable business and agricultural practices.

The main focus of the Teeb study, Natural Capital at Risk: the Top 100 Externalities of Business , was to quantify the costs and risks to investors, businesses and governments as these “external” costs begin to rebound and re-internalise in the shape of weather disasters, ecosystem collapses and spikes in global food prices.

“If unpriced natural capital costs are internalised, a large proportion would have to be passed on to consumers,” the report authors note.

“The risk to agricultural commodity prices is particularly striking, where the costs are universally higher than the revenues of this sector.”

What this report has identified is in essence a global ecological Ponzi scheme that dwarfs even the 2008 financial bubble. The world economy, and by extension, our current and future prosperity, depends utterly on a functioning biosphere and a stable climate.


Civilisation’s threat
Greenhouse gas reduction is expensive but the cost of irreversible climate destabilisation is beyond calculation. Unsustainable business practices and the ideologies that sustain them may well be the greatest threat civilisation has ever faced.

The world’s top five hydrocarbon energy companies earn $375 million – every day – by privatising their profits while fly-tipping the risks on to humanity, including future generations. This cash purchases political acquiescence, science denial and media collusion.

John Gibbons is an environmental writer . He tweets @think_or_swim