The 61 hectares of vacant or derelict land could be used for housing, shops and offices 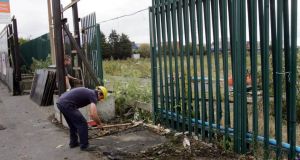 Glass Bottle site in Ringsend, Dublin, in 2011: it is the largest site on the list at 10 hectares. Photograph : Matt Kavanagh / The Irish Times

More than 61 hectares of vacant or derelict land, spread over 282 sites in central Dublin, could be developed for homes or commercial buildings, according to Dublin City Council.

An 18-month audit by the council has identified 151 vacant plots of land and 131 sites with derelict buildings, which are zoned for development but are left unused.

The report, to be presented to councillors today, will determine what land should be subject to the new vacant-sites levy which will be introduced under the Planning Bill. The Bill is due to be enacted in the coming months.

The sites, between the city’s canals, make up 4 per cent of the zoned land in the inner city, which the council said is a similar vacancy and dereliction level to Glasgow (4 per cent) and Greater Manchester (5 per cent).

The sites are in three categories: fully vacant land, vacant land with derelict structures, and sites entirely taken up by dilapidated buildings.

Dilapidated buildings were the smaller group, accounting for just 40 sites identified and occupying only 1.7 hectares or 3 per cent of vacant land.

The council has recorded 13 sites that are over a hectare and account for more than half of the vacant and derelict land in the city. A further 14 sites are between half and one hectare. These 27 sites comprise a 10th of those recorded, but occupy 70 per cent of the land surveyed.

The largest plot is the Irish Glass Bottle site in Ringsend at just over 10 hectares. It was bought in 2006 for €412 million by a consortium that included the State’s Dublin Docklands Development Authority. It is still undeveloped. The second-largest site, Clancy Quay, formerly Clancy army barracks at Island Bridge, is just over half that size at 5.6 hectares.

Most of the sites are relatively small, however, with those under 0.1 of a hectare accounting for more than two-thirds of the total.

Land covered by Strategic Development Zones, such as those set up for the docklands to fast-track its development, as well as designated regeneration areas, such as O’Devaney Gardens where a public private partnership (PPP) scheme collapsed seven years ago, account for 40 per cent of the total land, but just 16 sites.

Most of the sites, 106, are on lands zoned for city centre mixed use, that is, commercial and residential development. A further 80 sites are zoned residential and another 10 are residential and in conservation areas. These 90 sites occupy seven hectares or 11 per cent of the vacant land.

The council itself owns around eight hectares of sites, largely in flats complexes which were to have been regenerated though schemes that failed when the property market collapsed and developers backed out.

The council and the OPW will be exempt from the levy.