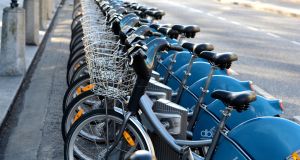 The council wants to increase the fee to €25 this year and €30 next year. Photograph: David Sleator/The Irish Times

Dublin Bikes subscriptions are set to be increased by 50 per cent, and a new funding strategy that could see advertising panels at the College Green plaza is to be developed, under a €100 million expansion plan for the scheme.

The hugely popular bike hire service has been operating in the city since 2009. While it is currently funded though subscription charges and sponsorship, Dublin City Council is subventing the scheme and paid €376,211 towards it in 2015.

The council said it can no longer bear this cost and needs to increase the annual subscription charge. The charge in 2009 was set at €10 a year and was increased to €20 in 2013. The council wants to increase it to €25 this year and €30 next year, a threefold increase on the original charge, or 50 per cent greater than the current subscription. It does not, however, plan to raise the €5 three-day subscription, or the per hour charges.

The scheme costs €1.9 million a year to run, subscriptions and usage charges come to €1.2 million and Coca Cola pays €312,000 in sponsorship. Increasing the annual subscription by €10 would generate an extra €580,000, if all long-term members remained in the scheme.

The council is proposing to fund the expansion through allowing advertising on publicly owned lands, subject to planning permission. While the new bike stations would be in the suburbs, the advertising would most likely be along busy traffic routes and in the core of the city centre. “The most commercially efficient sites are located on heavily trafficked radial/orbital routes, or within key civic/retail quarters centred on O’Connell Street, College Green, Grafton Street etc.”

Modern advertising structures using “LED display technology” were the most commercially viable, and had the potential to “full or part-fund all remaining expansion phases”.

The scheme was originally funded through an outdoor advertising deal allowing JC Decaux to erect advertising panels at more than 70 locations in the city. However, the expansion involved sponsorship though Coke Zero branding on bikes.

In relation to the price increase, he said there might be the potential to keep prices lower for certain groups such as students and the unemployed.