Donegal floods: ‘God knows when we’ll get back in’

In Buncrana, the scale of the damage has shocked locals, troops and a council engineer 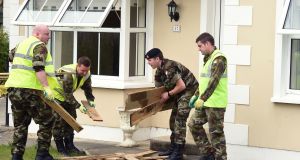 As the two soldiers hoiked a sodden and mud spattered sofa up and into the skip, Ciara O’Neill shed no tears.

“I always hated that,” she said ruefully.

There wasn’t much to love on Friday about her mother Winnie’s house at Elm Park on the outskirts of Buncrana, a small estate of homes not many years old, and with gardens that were clearly the pride of their owners.

“It’s contaminated now,” Winnie said of her home, as soldiers from the 28th Infantry Battalion, based at Finner Camp in Donegal, got stuck into a general clean-up with sweeping brushes, wheelbarrows and the muscle power that can be exerted by forming a simple human chain.

It didn’t take long to make an impact.

The Crana river, which flows behind about half a dozen of the homes on the small estate, burst its banks (for the first time there) on Tuesday night and, deciding to cut a corner, ripped through them and their gardens, destroying much in its path.

One of Winnie’s neighbours, Treacy Kelly, and two children, were almost swept away, save for the bravery of her family and other residents who grabbed them to safety. But her house is severely damaged now, a tell-tale vertical crack in the front bay.

The back garden wall of Siobhán Kenny’s house was tossed away by the torrent and her garden pulled asunder.

The 30 troops from the 28th who came to help clear up the debris threw everything – carpets, ruined furniture and damaged white goods – into skips provided free by Donegal County Council. The troops were commanded by Capt Bridget Clarke, who worked with Donegal council senior executive engineer Donal Walker.

They went to four locations – Burnfoot, Buncrana, Clonmany and Carndonagh – with Mr Walker listening to the concerns of residents, promising to do what he could and showing genuine concern.

“At the end of the day, they are all citizens of Donegal and the least they can expect is some help from us,” he said.

The flooding – the result of only a few hours’ extreme rain – affected locations in southern Inishowen, between Quigley’s Point, Buncrana and Burnfoot, but the scale of the damage has shocked.

Mr Walker said he had never seen anything like it and planning for something like it was very difficult for a local authority.

“We design to a one-in-50-years storm,” he said. “They say this was a one-in-100-years, but if you were to design for that, maybe you’d build nothing. On the other hand, look at the carnage here.”

Many of the flood-damaged homes, in Elm Park and elsewhere, were also contaminated by diesel, burst from home heating tanks swept aside. The long-term implications are unclear, but for now, some homes are uninhabitable.

“God knows when we’ll get back in,” said Winnie.