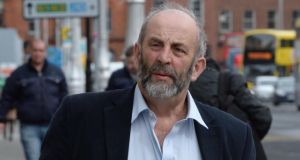 Independent TD Danny Healy-Rae: ‘If someone told me to go out and knock a fairy fort or touch it, I would starve first.’ Photograph: Brenda Fitzsimons

Independent TD Danny Healy-Rae has insisted a dip in a Kerry road which had been repaired before mysteriously reappearing is due to the presence of fairy forts.

“There are numerous fairy forts in that area,” he said yesterday. “I know that they are linked. Anyone that tampered with them back over the years paid a high price and had bad luck.”

Asked if he believed in fairies, the TD said the local belief – which he shared – was that “there was something in these places you shouldn’t touch”.

These were “sacred places” and fairies were believed to inhabit them, he said.

“I have a machine standing in the yard right now. And if someone told me to go out and knock a fairy fort or touch it, I would starve first,” said Mr Healy-Rae, who owns a plant hire company.

He first raised the issue of fairies at a Kerry County Council meeting in February 2007 after the N22, then a relatively new national primary road, developed a dip near Curraglass.

In a formal motion on the cause of the hollow, Mr Healy-Rae, then a councillor, had asked: “Is it fairies at work?”

The council’s road department replied that it was due to “a deeper underlying subsoil/geotechnical problem”.

The issue was again raised at a county council meeting last week, where Mr Healy-Rae’s daughter Maura said her father was convinced fairies were in the area.

Mr Healy-Rae yesterday said the road network passes through an extensive area of standing stones, stone circles and ancient monuments that is rich in folklore and fairy stories.

He said a fairy fort was causing the problem, which has recurred on the left hand side of the road just before the Kerry Way.

“That is what is responsible for the dip in the N22 which has occurred again, despite the council spending around €40,000 to repair it,” he said, adding that it needed to be addressed before a driver came across it suddenly and lost control.