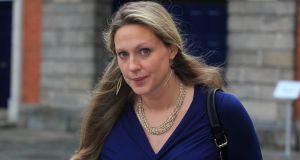 The father of ‘Ms D’ was shocked when shown an erroneous report detailing an alleged serious sexual assault on his daughter by whistleblower Sgt Maurice McCabe, the Charleton Tribunal has heard.

Psychologist and counsellor Laura Brophy told the tribunal of an error she made in 2013 which saw the details of alleged sexual abuse of ‘Ms D’ by Sgt McCabe being mistakenly replaced with details of another, much more serious case she was dealing with. That case involved a different client and a different alleged perpetrator.

The allegation by ‘Ms D’ was of “dry humping” during a game of hide and seek in 1998, an allegation that was investigated by gardaí in 2006 and which the DPP decided did not merit charges.

Micheál O’Higgins SC, for Garda Commissioner Nóirín O’Sullivan and other senior officers, read out a passage from a statement made by the father of ‘Ms D’, a Garda, to investigators acting for the tribunal.

‘Mr D’ said he was invited by Supt McGinn into his office and handed a HSE referral form and asked if this concerned his daughter. He said he read the detail in the report and got “a fierce shock”.

He was wondering if his daughter had told the counsellor these details and not her parents.

The Garda did not say anything to the superintendent about the discrepancy between what was in the statement and the complaint he knew had been made by his daughter against Sgt McCabe in 2006.

Mr O’Higgins told Ms Brophy that ‘Ms D’ had said she was contacted by her father and told about the incorrect referral form and the false information about alleged digital penetration.

Ms Brophy said ‘Ms D’ subsequently contacted her and told her that the Garda in Bailieboro had been given false information about the alleged assault she mentioned to Ms Brophy when she sought counselling the previous year. It was as a result of this contact that she realised she had made a mistake and included incorrect details as to the assault being alleged.

Ms Brophy told the tribunal chairman, Mr Justice Peter Charleton, that she would never be complicit in deliberately filing false information so as to damage Sgt McCabe’s reputation.

The chairman said there was a coincidence of circumstances in that ‘Ms D’ had approached the Rian service, where Ms Brophy worked, in July 13th, 2013, and Ms Brophy had first met with her on July 23rd.

Meanwhile, the tribunal heard Sgt McCabe was party to a disciplinary tribunal arising from what was known as the Molloy case, which involved the disappearance from Bailieboro station of a computer linked to a sexual abuse case.

On the same day that ‘Ms D’ met with Ms Brophy for the first time, Sgt McCabe was told the disciplinary investigation had been resolved in his favour.

If you were so minded to think so, the judge said, by making this error an enormous amount of trouble was being caused, which “perhaps supported those in the Garda who were opposed to Sgt McCabe.”

Asked if she would countenance being party to such a thing deliberately, Ms Brophy said there was “no way I would consider doing something like that.”

It would be defamation of character and catastrophic and she would “never be complicit in something like that. It is the only thing I can say.” She said she had never heard of the Molloy case.

The tribunal heard that when the child and family agency, Tusla, subsequently sought to right the information in the incorrect report concerning ‘Ms D’ and Sgt McCabe, it left in one part of the false claim to the effect that the alleged abuser threatened to kill the abused person’s father, “or words to that effect,” if she revealed what had happened.