Coveney not ‘intimidatory’ when he challenged pilot, Varadkar says 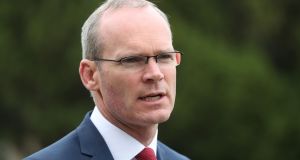 “I have total respect for the judgement of military personnel whether they’re in the Naval Service, the Air Corps or in the Army,” Minister for Foreign Affairs Simon Coveney said. Photograph: Niall CArson/PA

Simon Coveney was not being intimidatory when he questioned the judgement of an experienced Air Corps pilot who refused to fly him to Cork because of predicted fog, Taoiseach Leo Varadkar has said.

He said he did not think it was correct to characterise the Minister for Foreign Affairs contacting the pilot directly as intimidatory.

“I certainly don’t think that was Mr Coveney’s intention,’’ he added.

“It was rather just to ask a question or to offer a query.’’

Mr Varadkar was replying in the Dáil to Fianna Fáil leader Micheál Martin who raised the report in The Irish Times that the Air Corps was “very unhappy’’ about the incident on June 17th, 2015, when Mr Coveney was minister for defence.

Mr Varadkar said there was no suggestion that Mr Coveney or any other Government Minister would try to second guess the judgement of a pilot. When it came to aviation, safety must come first, he added.

“It is always the pilot’s decision and not the passenger’s as to whether they should fly or not,’’ he said.

“It can be construed, and I am not saying it is, there was some form of intimidation, pressure on the pilot,’’ he added.

The issue of safety came to mind and the professional’s judgement should be final, Mr Martin said.

He said safety should never be compromised by somebody’s diary agenda and clear protocols should exist. He asked if the Minister had been asked to apologise to the Air Corps.

Mr Coveney has responded to the story in Wednesday’s Irish Times, saying he has the “utmost respect for all military personnel”.

In an email between Department of Defence officials, the Air Corps is described as being “very unhappy” about the incident on June 17th, 2015, when Mr Coveney was minister for defence. The email was obtained by The Irish Times under the Freedom of Information Act,

The incident began when Mr Coveney’s private secretary, Vincent Lowe, was told the minister’s early-morning flight to Cork had been cancelled. The decision prompted tart exchanges between the minister and the pilot, whom Mr Coveney contacted directly, and later between the pilot and Mr Lowe.

Speaking on his way into a Cabinet meeting on Wednesday, Mr Coveney told reporters “ I have the utmost respect for all military personnel and I think that my time in the Department of the Defence would show that.

“So I don’t want to add to that story any further apart from to say that I have total respect for the judgement of military personnel whether they’re in the Naval Service, the Air Corps or in the Army.

Mr Coveney has been urged to “clarify exactly what happened” by Fianna Fáil TD Michael McGrath . He said “clearly the issue escalated”.

Speaking on Newstalk Breakfast, Mr McGrath said: “I think for his own sake he should come out and clarify whether or not he did challenge the pilot, because there’s an issue raised about the tone of the exchange as well.”

Details are captured in an email, obtained by The Irish Times under the Freedom of Information Act, that were written later that day by Department of Defence official Cathal Duffy to Brian Spain, the director of defence, based on conversations with Lt Col (now Col) Barry Hanan.

“The Minister’s opening line was, ‘I need to understand why we’re not going to Cork’. The pilot explained the situation regarding fog in Cork but I am informed that the Minister’s tone was one of frustration and the comment was made that he has ‘a very important meeting in Cork’.”

A sense was conveyed to the pilot “that this is also your problem”, says the email. “According to Barry, the pilot is not happy about receiving this call and Barry stated that from the [AIR CORPS]\perspective they are not either and they have never received such a call in 25 years.”

Col Hanan was relieved the call had been taken “by an experienced Comdt pilot with 20 years’ experience who is well able to hold his ground” rather than “a less experienced” pilot.

Later, Mr Lowe, “presumably at the direction of the Minister”, phoned the pilot to say there was no fog in Cork. “This was seen by the pilot . . . as ‘rubbing it in’ and has added to their annoyance,” said the email.

In late May, Mr Coveney was asked about the incident but his spokeswoman said he would not comment. Asked again on Tuesday , there was no response from his spokeswoman.