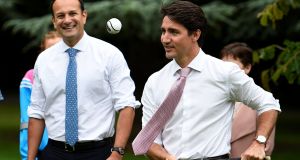 Ireland and Canada could benefit by staying “open to the world” as their nearest neighbours, the United Kingdom and United States, turn “inward” , Canadian prime minister Justin Trudeau said after a meeting with Taoiseach Leo Varadkar.

Although he did not specifically mention Britain’s withdrawal from the European Union or the election of Donald Trump, Mr Trudeau said the UK and US “are turning inward or at least turning in a different direction”.

“There are tremendous opportunities for countries like Canada and Ireland at a time where perhaps our significant allies and trading partners, in the case of the UK and US, are turning inward or at least turning in a different direction, to make the pitch that Canada and Ireland are places that are exciting and open to the world in a positive, progressive way,” he said at a press conference following a meeting with Mr Varadkar at Farmleigh House in the Phoenix Park.

The two leaders discussed a number of issues, such as multilateralism, but one of the main items on the agenda was the Ceta free-trade deal between Canada and the European Union.

Both men defended Ceta, which has faced opposition from some unions and left-wing groups.

Mr Trudeau said that any time “ambitious” trade deals are negotiated “there will be concerns”, but he described Ceta as a “model” trade deal that shows what such agreements will look like in the future.

Mr Varadkar said the Ceta deal has “more upsides than downsides” and had huge potential for Ireland.

The pair also discussed the issue of abortion, and Government sources said Mr Trudeau was “supportive” of the moves towards holding a referendum on the eighth amendment to the Constitution, which gives equal right to the mother and the unborn, early next year.

After today's Dail business joined @JustinTrudeau for quick jog through #PhoenixPark. Now off to Dublin Castle for evening business pic.twitter.com/irb1nnmj9I

The sun came out just in time for a quick chance to see more of this beautiful part of Dublin on foot... nice pace @campaignforleo. pic.twitter.com/qQFoMxbJac

Mr Trudeau has recently promised to spend just under €600 million on international sexual and reproductive health programmes over the next three years. This followed on from President Trump’s withdrawing of American funding for such services.

On the issue of Brexit, Mr Varadkar said the UK should not be allowed strike free-trade deals with countries such as Canada even during any transitional phase of withdrawal from the EU.

The deadline for the completion of Brexit talks is March 2019, and senior EU and UK figures have raised the prospect of a transitional deal for a number of years after that date.

However, Mr Varadkar said that the same rules should apply during that period as apply during full EU membership, which means the UK could not strike its own trade deals with non-EU countries.

“For so long as the United Kingdom is a member of the European Union, they are not at liberty to conclude trade agreements with other countries,” the Taoiseach said. “Certainly I can’t see a scenario where Britain would remain a member of the EU, even in a transitional period, and then negotiate other trade deals on their own.”

The pair also discussed how to increase female participation in politics. Mr Varadkar was recently criticised for the gender balance of his ministerial appointments.

Mr Trudeau has a 50-50 male-female split in his cabinet and has described himself as a feminist.

Mr Varadkar said he sought advice from Mr Trudeau about his efforts to increase the number of female members of parliament in Canada “over three or four years”.

“That’s something that I want to do over the next couple of years,” he said, adding that his goal after the next election is to have 20 female TDs and a 50-50 split in the longer term.”

When asked if he considered himself a feminist, Mr Varadkar replied: “If feminism is defined as supporting equal opportunity between men and women, which I do, then I consider myself a feminist.

“But I totally accept that other people would have a different definition of that and would therefore not agree.”

Mr Trudeau said increasing the number of women in leadership roles is not just something “they need” but also what “we need”.

“Getting more women into positions of power and authority and success is not just the right thing to do, it is the smart thing to do, and that’s something we both agree with.”