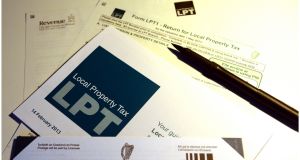 Local Property Tax (LPT) bills for Dublin city homeowners will not rise next year, despite pleas from city council management for an increase to help offset the ‘devastating’ financial impact of the coronavirus pandemic.

Local Property Tax (LPT) bills for Dublin city homeowners will not rise next year, despite pleas from city council management for an increase to help offset the “devastating” financial impact of the coronavirus pandemic.

Council chief executive Owen Keegan and its head of finance, Kathy Quinn, appealed to councillors to increase the tax by 30 per cent on this year’s rate to generate €24 million to help plug a €39 million hole in the council’s finances.

The proposal would have seen average annual charge increase by more than €120 from €344 to €465 for homeowners in the city. However, councillors voted by 34 to 21 to keep the tax at the current rate.

Councillors have the power to increase or reduce the rate charged in their area by up to 15 per cent each year from the basic rate, which is calculated based on the value of a property.

However, Fianna Fáil sided with Fine Gael, Sinn Féin and Independents in voting for the 15 per cent cut, which has been applied each year since the tax was introduced in 2013.

The council expects Covid-19 will cost it some €41 million this year, Ms Quinn said, with costs including expenditure on the Dublin Fire Brigade ambulance service, homeless services and personal protective equipment.

In addition to a loss of income from commercial rates, she said, the council also expected to be down €20 million from the loss of parking income, planning fees and housing rents.

The council had taken cost saving measures to off-set these losses, Ms Quinn said, but still faced a €39 million hole in its budget and there was no clarity if more funds would be provided by the Government.

She had urged councillors to consider the “devastating impact on council services, if we have to find savings of €39 million”.

Mr Keegan said: “The need for additional resources has never been more pertinent in terms of the absolute requirement for additional funding to support services, in contrast to the minimal impact on householders of the change”.