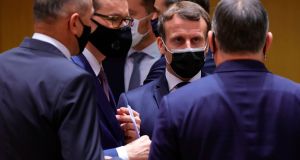 EU leaders reached a deal to cut climate emissions in the bloc by 55 per cent within a decade compared to 1990 levels after all-night talks to resolve how the change could be fairly implemented.

The 2030 target is a key part of the EU’s aim to reach carbon neutrality by 2050, and comes as the bloc signed off on a €1.85 trillion budget and stimulus package tied to green investments and digitalisation projects.

“That’s a historic development,” said Taoiseach Micheál Martin as he emerged on Friday from the marathon debate with fellow EU leaders devoted to getting the climate agreement over the line.

“It was a very tough negotiation. That’s what, to be frank with you, took us through the night. I think there was a steely determination ... to get this over the line because we have to send a message to the world from the European Union perspective that we wanted to take this further leap forward in terms of climate change policy.”

Mr Martin said he detected “very significant momentum around climate change”, and that the leaders had young people in mind after two years that saw a surge in activism by school students demanding a change of course to avoid catastrophic climate change.

“I think many leaders were motivated by that. We would be failing the younger generations of the world if we weren’t in a position to come forward with an agreement today,” Mr Martin said.

The pact came just in time for the fifth anniversary of the Paris Agreement, an international treaty in which 196 countries committed to keeping global warming to below 1.5 degrees if possible to avoid the most dire forecasts for sea level rises and extreme weather events.

The EU agreement is a further boost for hopes for global action following a recent commitment by China to reach carbon neutrality by 2060, and a pledge by United States president-elect Joe Biden to rejoin the Paris accord. Last week British prime minister Boris Johnson set out a target of cutting emissions by 68 per cent by 2030.

This year is set to be one of the warmest on record, a trend driving the rapid melting of ice at the North and South Poles, with an increase in storms, vast wildfires in Siberia, Australia, the United States and South America, and flooding in Africa and southeast Asia, according to the World Meteorological Organisation.

Several member states, including Poland, had been reluctant to commit to the target without reassurance that they would receive help in transitioning away from fossil fuels. Almost half of Polish energy comes from the highly-polluting coal industry, which is also a major employer.

The opposition was overcome with reassurances of ample financial support and a commitment to reach the target collectively. German chancellor Angela Merkel described the agreement reached as a “very, very important result”, adding “it was worth staying up all night for that”.

A €750 billion package of grants and loans set to be handed out to EU member states from next year to counteract the economic damage of the Covid-19 pandemic is to be tied to green and digital investments, such as the electrification of transport systems and transition to clean energy.

The Irish Government has described this as an opportunity for investment in the future. Asked whether this could be an opening to help the midlands region affected by the closure of peat power plants, Minister for Finance Paschal Donohoe said the Government would examine all proposals.