Call for sale of ghost estates to buiders

Small builders or developers could turn unfinished estates around at cost 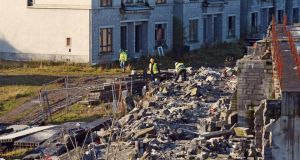 Selling off entire unfinished housing estates, “warts and all” to small builders or developers who would then complete them would be an efficient way to deal with the problem, according to Robert Hoban, director of Allsop Space, known for its auctions of distressed properties.

“We have successfully exchanged 11 such cases through the auction process,” he told The Irish Times. “Most of these unfinished schemes are purchased by small builders/developers looking to start again, seeking projects that they can turn around at cost.”

Contrary to any impression that unfinished estates were “unsaleable”, Mr Hoban said the auction solution had been “successfully working away in the background”.

For example, a “ghost estate” of 14 houses in Castlemaine, Co Kerry, was similarly sold in its entirety in this way.

Reserve price
“We came up with the formula of offering unfinished housing developments for auction with a disclosed reserve price reflecting the value of the underlying land, priced per acre. Open bidding then decides how much premium above land value the property merits, warts and all.”

Mr Hoban said there was “full disclosure” of all the issues involved via a legal pack, available for download before the auction, including how any bonds, outstanding development levies and services were to be dealt with – all of these become the responsibility of the purchaser.

“The benefit of this process is that the new owner is very keen to complete the development as soon as possible, including returning unused areas back to green space, and completing the roads, services and common areas – and has the finance to do so,” the Allsop director explained.

At cost
“They are able to complete the works at cost [their own labour], and this will be at a much lower cost than the bank/State would have to incur to complete the same development,” he said.

Although it would not work in every situation, it was the “favourable option” in the right circumstances.

Mr Hoban said purchasers were “not overly concerned” about the immediate saleability of the completed units as they could rely on the rental market.

Many of these purchasers are partnerships, whereby a builder/developer has a financial backer. The considered view can then be taken as to when to release the units to the market for sale over the medium term. A long-term view is then taken regarding existing permission for additional units.”

He cited the example of phase two of a housing scheme in Ballyjamesduff, Co Cavan, where only three of 30 houses had been built. The property was sold to a Northern Ireland builder for €40,000; he completed the three houses, turned the rest back to green space and rented them out.