Water supplies running low in many parts of the country 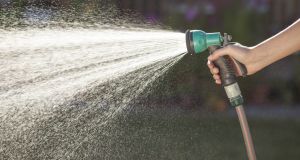 Water supplies in many parts of the country are running low, authorities warned today.

However, the shortage has not been caused by the recent mini heatwave, rather an exceptionally dry winter which has continued into the first half of 2017, according to Irish Water.

“Low rainfall for several months, especially through the winter period, will have a knock on effect on available raw water supplies across the country in coming months”, a spokeswoman for Ervia, Irish Water’s parent company, confirmed.

Ervia has overall responsibility for water supply, and works with local authorities in maintaining water quality and quantity of supply to householders and businesses.

Irish Water said it is monitoring and managing water storage and the impact of low seasonal rainfall on longer term raw and treated water supply throughout the Republic on a daily basis. Rainfall plays a critical role in recharging both groundwater and surface water supplies.

The impact of exceptionally low rainfall over the past six to nine months has been an issue in many parts of Ireland, while the UK and France has been experiencing more acute problems as a consequence. Met Éireann has confirmed the pattern since October, though many areas have had above average rainfall for June.

“Due to unseasonably dry weather over a number of months and throughout last winter”, Irish Water has advised consumers to conserve and minimise water usage for the foreseeable future in a number of locations including parts of Donegal, Galway and Westmeath.

In some cases where water supplies are seriously compromised, Irish Water has had to impose water restrictions during times of lower demand. In others, consumers are experiencing low pressure in supplies.

In all locations Irish Water is working with the relevant local authority to find and repair leaks, prioritising those having greatest impact and appealing to the public to report any leaks they see on the public network by calling its customer care helpline at 1850 278 278.

In Co Galway, due to very low availability of fresh water for treatment on Inis Oirr, Irish Water has started tankering water to the island to ensure the availability of a drinking water supply for islanders and visitors during the summer period. Night time water restrictions on Inis Oírr will remain in place for the foreseeable future. On Inis Meain a water conservation notice remains in place though heavy rainfall earlier this month has replenished stocks on Inis Mór.

Irish Water is also advising customers in Westmeath to continue to conserve water usage for the foreseeable future due to the low levels of raw water from Lough Owel. “Irish Water in partnership with Westmeath County Council are continuing to carry out priority repairs to leaks on the Mullingar Regional Water Supply public network which is helping to save water but the need to conserve available treated water supplies remains high,” it added.

Such are the vagaries of weather, rainfall amounts have been above average for June so fair, according to Aidan Murphy Met Éireann’s climate inquiries manager. Hydrological analysis of their figures compiled at weather stations confirm rainfall between November and December 2016 was “substantially below normal”.

Analysis of data from five stations for 2017 shows, however, rainfall varying between 82 per cent and 101 per cent of normal which would not be considered exceptional, he added.

Their station at Baldonnel, which is closest to major water sources serving the Dublin region, illustrates the variation. It has had 53 per cent of normal rainfall since October (the start of “the hydrological year”), while so far in June it has had above average rainfall.

The dry period over the last nine months falls within the category of natural variability, and cannot be blamed on climate change. Met Éireann records show, however, a robust warming trend in recent decades, consistent with the global picture.

Areas where supply difficulties are most acute:

Galway: Restrictions are in place on two of the Aran Islands, Inis Oírr and Inis Meain. Customers on the Williamstown supply in North Galway have been urged to conserve treated water supply as the reservoir levels “have reached a critical point”.

Westmeath: Unseasonably dry weather conditions which have resulted in “historically low water levels” in Lough Owel which serves Mullingar and eastern parts of the county, a population base of 52,000 people. Irish Water is advising customers to continue to conserve water usage for the foreseeable future due to “exceptionally low levels of raw water”.

How to conserve water (according to Irish Water)

Leak free: Check that your home is leak free. Check for running overflows and fix any dripping taps, cisterns or pipes.

Shower v bath: The average bath uses 80 litres of water compared to an average shower using 49 litres in seven minutes. Switch your bath to a shower for a massive water saving.