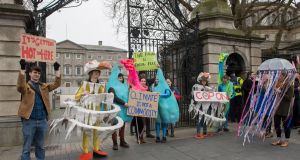 Despite strong Government opposition, a Bill to end the granting of licences for fossil fuel exploration and extraction in Ireland is set to clear its first hurdle in the Dáil because of critical support from Fianna Fáil. Environmental groups have welcomed the move.

The Bill, introduced by Solidarity-People Before Profit TD Bríd Smith in response to the impact of fossil fuels on climate change and their contribution to global warming, is set to pass to committee stage following the support of all Opposition parties and some independents.

The Government and Independent TD Michael Healy-Rae opposed the Bill when it was considered during private members’ time – a formal vote will be taken on Thursday.

The Bill was supported by a large number of environmental groups who protested outside the Dáil and were presented in the visitors’ gallery during the debate.

“If we are serious about meeting the Paris climate goals, at most we can burn just one-third of existing fossil fuel reserves. If we can’t afford to burn them what’s the point in drilling for them?” he said.

Their research showed “Ireland’s energy security does not depend on Irish gas an oil. In fact, to increase our energy security we are far better off investing in local renewables and warmer homes that use less fuel”.

Friends of the Earth director Oisín Coghlan said “history was in the making as a Dáil majority had emerged supporting the ending of new drilling for oil and gas”. Fianna Fáil had taken a landmark position in supporting the Bill, he said.

“It was extraordinary to see the party of de Valera call time on the exploration for fossil fuels in Ireland and its territorial waters in the Dáil this evening. It was a serious and considered speech from their spokesman Timmy Dooley. ”

He added: “The Government clung stubbornly to outdated thinking in today’s debate, but a cross-party consensus has emerged to end drilling for new oil and gas. Tomorrow Leo Varadkar’s party will vote for the past but they will lose. Dáil Éireann will vote for another step towards a fossil fuel free future.”

Trócaire director Éamonn Meehan welcomed the significant support for this Bill from the majority of deputies in the Dáil. “Ireland has recently been squarely ‘outed’ internationally as a climate laggard and we are set to miss our existing national and international commitments by a wide margin.”

Fossil fuels were responsible for about two-thirds of the greenhouse gas emissions that are causing climate change, he added. “To stop climate change we must end our dependence on fossil fuels. While the impacts of climate change are being felt increasingly in Ireland, it is in the countries that Trócaire is working that the impacts are at crisis levels.”

“In East Africa today, persistent drought is devastating millions of lives. The poorest countries in the world are being hit hardest. Climate change is rolling back decades of progress in efforts to eliminate extreme poverty,” he added.

Trócaire’s head of policy and advocacy Niamh Garvey, added: “The evidence is clear and unequivocal that the vast majority of fossil fuels must remain underground if we are to deliver on the commitments to curb runaway climate change adopted by global leaders in the Paris Agreement.”

Like the Fossil Fuel Divestment Bill, which is progressing through the Oireachtas, the Bill discussed on Wednesday “seeks to have this fact formally anchored in legislation as part of a major, much-needed turnaround in Irish climate policy,” she said.

“Both Bills have received a huge amount of public support, and there is already another similar Bill awaiting debate in the Dáil. This issue is clearly not going away,” Ms Garvey said.