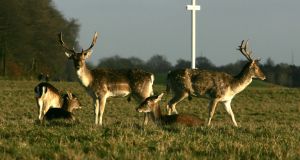 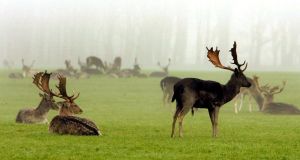 Deer in the mist in the Phoenix Park. Photograph: David Sleator

The Office of Public Works (OPW) has hired a sniper to kill more than 200 deer in Dublin’s Phoenix Park during the past two years, selling the carcasses to a meat supplier for €19,488.

A total of 203 deer were shot by the marksman as part of eight culls carried out in 2016 and 2017. A further 57 of the animals were killed as a result of road accidents and natural causes during the same period.

The OPW said that the Phoenix Park remained open to the public while the culls were performed by a 68-year-old sniper from Bray, Co Wicklow. However, it said that a “detailed protocol” was followed, which took account of the welfare of the deer and the safety of the public.

The carcasses of the culled deer were sold for an average of €96 each to a Wicklow-based meat supplier, which specialises in processing game and stocks butchers and supermarkets in 10 counties.

A cull of 38 female and 11 male deer over two days in January and February 2017 reduced the herd to 540, compared with 570 recorded in October 2016. A further two culls were carried in November 2017, during which an additional 43 deer were killed.

In total, 111 deer were shot during four culls carried out during 2016, while 92 deer were culled over four days last year. These were comprised of 138 females and 65 males.

The figures, which were released in response to a request under the Freedom of Information Act, also show that 38 deer were killed as a result of road accidents and other causes in 2016, while 19 died in this manner last year.

A spokesperson for the OPW said that the cause of these deaths included traffic accidents, injuries sustained during the rutting or mating season, and other natural causes.

“An over-abundant deer population can result in increasing incidence of road traffic accidents and increase the potential role for deer in the epidemiology of specific diseases,” she said.

“The OPW works with the School of Biology and Environmental Science in University College Dublin with regard to the management and scientific research of the deer herd in the Phoenix Park,” she added.

The OPW declined to state how much the sniper was paid to shoot deer in the Phoenix Park, citing reasons of commercial sensitivity.