How the dearg-a-daol became Ireland’s most feared beetle 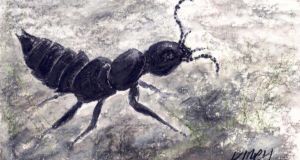 A dearg-a-daol. Drawing by Michael Viney

It poses so well for the camera – tail cocked up, dark jaws agape. In the pictures offered to Eye on Nature this month, Ocypus olens has never looked more like the scorpion it has never pretended to be.

Both recognition and sinister myth of the dearg-a-daol, once Ireland’s most unspeakable beetle, seem to be fading from at least the urban memory.

On my initial sojourn in Ireland, renting a Connemara cottage for a winter, I was warned solicitously to watch out for the insect when fetching turf for the fire. If sensing attack, its bite (not sting) can, indeed, be painful, and its smell – an exuded, secondary defence – is notably unpleasant (olens means smell).

Even in the early 1960s, the time of my western sabbatical, fear of encounters with the dearg-a-daol would have been touched with a more deeply malign reputation.

Often enmeshed in religious fable, the beetle’s reputation emerged in the nationwide archive of folklore collected by 50,000 schoolchildren in the late 1930s (available online at duchas.ie). Recurrent in the stories is the beetle’s betrayal of Christ to his enemies (including the soldiers and Herod) and being “cursed with the seven deadly sins”.

In what Patrick Pearse considered his grimmest story, a priest condemned a “sinful” woman by cursing her from the altar to be shunned as a dearg-a-daol.

From a Waterford school came the way to kill the beetle on sight: by putting your boot on it and wishing him “the curse of the seven deadly sins. Then these will be forgiven yourself.” This is preferably done before it puts its tail up, “but you will find it almost impossible to touch him before the tail turns up”.

This rove beetle’s threatening posture is accompanied by its exceptional blackness. Other black beetles have a decent gloss, a hint of a tint, or even a quite beautiful violet sheen. The dire, matt blackness of the dearg-a-daol, similar to that worn by a Hell’s Angels biker, sets one’s distaste on edge. Chasing the latest invader around the shower with a jug of water last week, I was glad to see it scuttle back down the plughole.

Considering the “devil’s coach horse”, as the English alternative has it, I found myself wondering how it came to adopt the scorpion’s intimidating pose. Ireland does have a few false scorpions, with similar pincers, but they are, sources assure me, “small and inoffensive and are rarely seen due to their size”.

The dearg-a-daol is in no way related to the arachnid that has put me off camping in deserts. The stingless beetle lifts its rear end, when alarmed, simply to look bigger and more threatening.

As to what it’s “for”, it’s a predator and scavenger, chewing up and spitting out the hard parts of woodlice, spiders and brown snails . A pulp horror novel of the 1970s saw it greatly enlarged for the cover, having developed a taste for dead people.

A late-summer mating season may have brought more dearg-a-daols out from cover. But autumn is also the time when another quite ill-regarded insect seeks somewhere to spend the winter.

Earwigs, too, have their “scorpion” pose. Press gently on an earwig’s front end, as naturalist Michael Chinery suggested in one of his books, and the tail will arch over its body and the pincers start to snap, if not hard enough to hurt your finger. (You first.)

Earwigs are remarkably tactile creatures, liking to feel both their upper and lower surfaces in contact with something smooth. Think the rolled petals of dahlias, the labyrinths of cauliflowers, the hollow around the stalk of an apple as it hangs from the tree, the collars of shirts left hanging on the clothesline.

The very name earwig reflects the folk belief that one’s earhole might be an attraction, with a consequent burrowing into the brain, though arsewig was a likely medieval coinage.

Discovered in the crevices of allotment vegetables, a first reaction is to wash it down the plughole of the kitchen sink. However, it is quite waterproof, its body armour coated in wax, and can survive hours of total immersion.

Indeed, rather like the dearg-a-daol, climbing up pipes is a common means of ingress to houses. But most earwigs actually prefer to spend winter somewhere very dry such as seed capsules, hollow stems, or, in the kitchen, the spout of a disused teapot.

All this is to discount the maternal virtues of the female. Having laid her eggs – perhaps 40 or 50 – in a nest of soil, she evicts her mate and broods them like a hen. She sticks to her post right through the winter, and when the eggs hatch in spring she forages for her babies, keeping them with her until family parties venture forth, to be snapped up by robins and wrens.