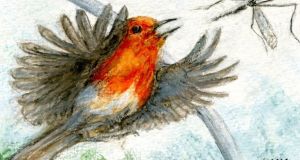 For several months, my unfailing companion during visits to the polytunnel has been a robin – always the same one, I think, hopping in at my heels as if keeping watch for my arrival.

You might think I would have sorted its identity by now, noting some quirk of beak or plumage to mark its singularity, but I just know it is the same bird, contentedly genderless in appearance, nondescript in muted, autumnal brown and orange.

Otherwise, if I take a rest in the canvas chair, it will roam off under the tomatoes for a while and then come back to perch nearby, watching hopefully, like a pet dog waiting for a walk.

In one such interlude I remembered, the robin, back in early summer, perched on a cross-bar of the tunnel and sang beautifully its full, territorial aria. It, or the present bird, patrolled the plastic ceiling, catching flies, before whizzing out through a gap at the door that was only half its width.

Remembering the summer song, and chatting to the waiting robin, as one does, I invited it to grant me “a few bars”. A short interval passed. Then, indeed, it softly responded, with a gentle pulsing of the throat, in a manner exactly described, as I later discovered, in David Lack’s famous 1943 study The Life of the Robin.

“A puzzling feature of robin singing,” wrote Lack, “is the subdued song sometimes heard in autumn. A robin may utter quiet phrases, audible at only a few yards, continuously for several minutes. Several other species sometimes sing in this apparently purposeless way in autumn.”

So there you are: a charming if remarkable coincidence, as science must insist. I intend, nonetheless, to reward the robin with a delicacy, a packet of dried “mealworms” – the larvae of a beetle. It may even come to take them from my hand.

The mealworms’ popularity (50g for €4) has them, for the moment, out of stock at the online shop of BirdWatch Ireland. But everything else is there in this richly provisioned avian delicatessen: niger seed, sunflower hearts, peanut cake, “hi energy” seed-and-insects mixes, fat balls and more.

On the same page are the means of dispensation, the feeding tubes and trays and perches to hang outside one’s kitchen window.

In the UK, some earnest research proposes that about half of homeowners feed birds, and at least one seed feeder exists for every nine potential peckers among the garden species. In Ireland, I would assume that the thousand or so people who take part in BirdWatch Ireland’s annual winter survey of garden birds are eager feeders, plus very many more who are just doing their own thing.

As temperature fall this weekend, hundreds of gardens across Ireland are sporting their first full tubes of peanuts since the spring. Such behaviour has spread across major parts of Europe, North America, Australia and New Zealand.

This is documented in Garden Birds, by Mike Toms of the British Trust for Ornithology. An offering in the prestigious New Naturalist series of William Collins, it is full of research that informs its bird profiles .

The feeding of so many different species has become ecologically important. It isn’t yet clear, writes Toms “whether it is better to encourage people to feed wild birds, regardless of the type of food that they provide, because it fosters a sense of connection with the natural world”.

And later: “It is no longer appropriate to merely follow the simplistic view that feeding garden birds is largely beneficial, and that any deleterious aspects are outweighed by the benefits gained.”

For example, extra food may encourage earlier breeding, with more chicks to feed. But what if they arrive sooner than natural foods are available? Garden feeding can boost the population of some species but also bring new risks of disease, light and noise pollution, flying into windows or death by cat.

The last, Toms reports, is a particular risk for robins in urban areas, along with daytime noise levels (as in Sheffield) that may force it to sing at night.

As a ground-feeding bird, without the strong claw-grip of finches, a robin may find the fine mesh of hanging feeders too challenging and so needs a feeder “with ‘O’ shaped perches”. To suit the different garden birds, Toms advises, “feed a number of foods in a number of different ways”.

Right – mealworms for the robin. And it doesn’t have to sing for its supper.

Concern about ‘risk’ to acute hospital patients amid Covid surge 11:00
Ronan Mullen calls for national voluntary collection for mother and baby home survivors 10:47
Snow and ice expected as weekend cold snap sets in 10:31
Gardaí make arrest after woman is seriously assaulted in Dublin 12:36
Covid-19 transmission levels ‘too high for schools to reopen’ despite harm to children 09:55