Michael Viney: People sought out trees, gardens and landscapes, the chance of wildlife large or small 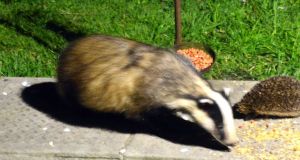 Among behavioural insights during the first year of Covid was new evidence for biophilia – an innately emotional human bond with the rest of the natural world. Proposed as part of human biology by the great Harvard naturalist Edward O Wilson in the 1990s, the hypothesis gained good weight in the choice of escape from lockdown.

For therapy, refuge, or simply the company of other living things, people sought out trees, gardens and landscapes, bathing in their greenery, their infinite variety, and the chance of wildlife large or small. Among rewards were the music of birdsong and the natural smell of the earth. Just the act of looking could find so much to see.

This being Ireland, most wildlife encounters were small, as sampled in the many smartphone images sent to Eye on Nature. As lockdown wore on, readers’ emails and photographs queued up daily in Ethna’s inbox. She responded to them all and pondered over the choice of those for print.

As 2020 began, another warmed winter was keeping flowers in bloom and bumblebees on the wing. A pair of swallows swooping after midges on the river Corrib in late December were still there in mid-January, adding to the records of Irish swallows that didn’t bother to migrate to Africa.

One winter day found a pretty beetle, iridescent with red and gold stripes, laying eggs on a lavender bush in Co Wicklow. Better known as the rosemary beetle, notorious shredder of herbal leaves, it was another alien. It adds to the destructive red lily beetle, the harlequin ladybird and other unwelcome incomers.

The first frogspawn came from Kerry in late January, but there were temperatures low enough for hair ice, the strange silky “frost beard” that can exude from dead wood on humid winter nights. It is actually caused by a fungus.

Later, as the lockdown took hold, garden forays with the children found them delighted with the geometry of shield bugs and the little pearly-white spiders that lurk in flowers to prey on visiting insects.

Hatchings of winged insects cued by temperature changes and reproduction cycles were signalled to Eye on Nature by many pictures of eye-catching lepidoptera – the big and beautiful emperor moth, searching by day for a whiff of female pheromones, the gorgeous peacock butterfly with even bigger eyes on its wings, the elegantly lemon caterpillar of the pale tussock moth, and more.

For coastal readers, abatement of the early gales brought reviving hikes along the tideline to pause at a stranded squid, sea cucumber, or a chunk of the digital soft coral known as dead man’s fingers. There were uncommonly frequent findings of buoy barnacles, clusters of shells like the gooseneck barnacles that arrive stuck on to logs or fish-boxes. These float instead from a white blob of hardened froth that they have made themselves.

At Dublin’s Dollymount strand, three little washed-up corpses of abandoned freshwater terrapins spoke of some mistaken hope that they were turtles of the sea. Coastal readers also saw birds out of context: a turtle dove in Co Cork, a stork in Kerry and parakeets in Dublin’s Fairview.

Without the usual press of traffic and people, how did Irish wildlife respond? Would the Co Clare pine marten have pressed its nose to the window anyway? Would the female hare have relaxed each morning to suckle her four leverets on the drive of a house in Co Galway? As for the badger and hedgehog sharing a back-garden feed Co Clare, didn’t they know that one’s supposed to eat the other?

The observations sent to Eye on Nature were random, but elsewhere the potential of lockdown was more organised. The National Biodiversity Centre staged a “Backyard Bioblitz” in May, inviting photographs through Twitter or Instagram for swift identification.

In the UK, the National Biodiversity Network involved 10 cities in a similar intensive weekend of sightings recorded “from windows, parks and during daily exercise”. It brought more than 71 observations of 3,425 species, with Birmingham the winner.

Lockdown also prompted a new surge in garden development, almost overwhelming some sources of online supplies. Much of it came from the drive to grow vegetables, which can be good for pollination, but more than two million domestic gardens could also offer wildlife habitats to make up for their loss in farmland.

Juanita Browne leads the way in her new Gardening for Biodiversity booklet. Produced by Laois County Council, helped by heritage officers across Ireland, it shows how to create an area that mimics a woodland edge, a wildflower meadow, a section of native hedgerow or a small pond. Brightly illustrated by Barrie Reynolds, it can be downloaded free.

Ethna and I wish our readers a happy and watchful New Year.